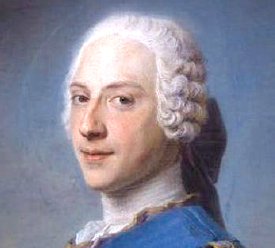 "Monarch Prophecies: Charlemagne Returns" by the Secret Society of Jacobites.

Consider this Roman Catholic Prophecy about Charlemagne from the Capuchin Friar (18th century).

OMAHA, Neb., July 24, 2020 /Standard Newswire/ -- "A scion of the Carolingian race, by all considered extinct, will come to Rome and behold and admire the piety and clemency of this Pontiff, who will crown him, and declare him to be the legitimate Emperor of the Romans. He shall destroy the Ottoman Empire and all heresies. With the assistance of God and of the Pope, he will cooperate in the reformation of abuses; he will assume the direction of temporal governments; he will assign a decent pension to the Pope and also the bishops and clergy. And they all will live in peace which shall last till the End of Time."

Most consider this prophecy to be an odd, outdated and irrelevant blip in history. It is not insignificant. Rather, a Carolingian Scion or descendant might live today who might be able to help us return to Zion.

This book heralds the return of the French Monarch as prophesied by Roman Catholic Prophets in France, Germany, and throughout Europe in history. Many believe the historians when they profess that the Carolingian line died out after Louis IV died around 954 AD fighting adversary Hugh Capet for the Throne of France.

However, the time of imminent peril to the Royal Family in France likely has passed. So, the secrets kept by the Jacobites are nigh time to be revealed. This sacred book attempts to piece together the true historical genealogical line from Charlemagne to modern times.

The Roman Catholic Prophets were not wrong. No, rather, they were right. This Jacobite historical account remained a secret hiding sins, but these events should not come as a surprise. The Jacobite history reads like the Old Testament, which is full of mankind's foibles worked out by God for good. Jacob had to trick his father Isaac into giving him birthright blessings. King David committed adultery and murder, but Jesus became a descendant nonetheless. And so, likewise with Bonnie Charles.

These acts of "angels" may seem like mischief, but nonetheless, a Carolingian Scion might be alive in modern day France, and most of civilization does not know that a seemingly dying Christendom could undergo religious revitalization. We hope you join in the heralding of a possible return to Christendom by reading "Monarch Prophecies: Charlemagne Returns."