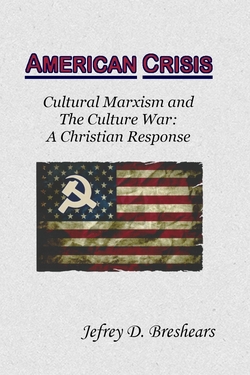 ATLANTA, Oct. 12, 2020 /Standard Newswire/ -- The new book 'American Crisis: Cultural Marxism and The Culture War - A Christian Response' by Jefrey D. Breshears is an incisive analysis of the origins and effects of the culture war raging in America today.

'American Crisis' exposes the insidious cultural Marxism at the root of the chaotic upheaval fomented by socialists, anarchists and "social justice" warriors across our nation during these critical days leading up to the 2020 election.

"This is a perilous time in our nation's history. The moral and spiritual influences of the past are disintegrating," says Dr. Breshears, Christian historian, apologist, and president of The Areopagus, a Christian study center in Atlanta, Georgia. "As a result, America has become increasingly chaotic and dysfunctional to an extent unimaginable just a few years ago."

We are facing an unrelenting culture war that threatens to destabilize the nation, destroy what remains of traditional Judeo-Christian values, and fundamentally transform America into a secular socialist state. Do individual Christians and the Church in general comprehend what is at stake in the 2020 election?

"I am challenging Christians to actively defend the biblical and moral principles upon which our country was built," says Dr. Breshears. "My hope is that serious and thoughtful Christians will not only read but heed the warnings and challenges presented in 'American Crisis' and respond accordingly to the call to wholistic and countercultural Christian discipleship."

Dozens of books have been published this year by leading Christian and conservative scholars on the threats to American society and culture, but 'American Crisis' provides the most in-depth analysis of both the problem and the solution.

A synopsis of the 425-page book including summaries of each chapter is available at The Areopagus website.

Published in July of 2020 by Centre•Pointe Publishing, 'American Crisis' is available in paperback and eBook through Amazon.