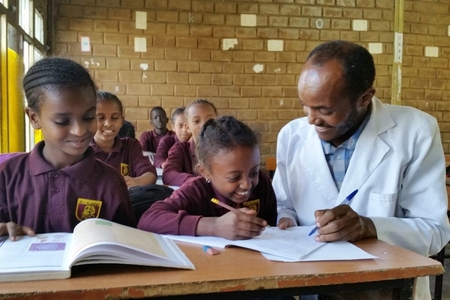 BCI President Keith Strawn founded the organization in 2001 after viewing the plight of orphaned children in Central America first-hand. Following outreach efforts in El Salvador and various communities in Ethiopia, BCI established roots in Debre Zeyit in 2007. Initially, BCI worked to find homes and guardians for orphaned children and later built the BCI Academy to address the need for quality education.

In 2015, the United Nations Educational, Scientific and Cultural Organization (UNESCO) ranked Ethiopia's literacy the 8th lowest in the world. Poverty, lack of access to quality education and early marriage are all factors influencing the low literacy rate. The children BCI serves are among the world's most vulnerable, and the mission is urgent: every child deserves an education.

The BCI Academy was built in three phases. The first phase included classrooms for grades 1-4, which opened in 2009. By 2012, the school had expanded to serve preschool through grade 8, with an enrollment of 299 students. In 2017, BCI acquired a second campus, allowing expansion to grade 10 and a jump in enrollment to 1,982 students. The final step to fulfill the vision of a complete education for vulnerable children in the community involves finishing grade 11-12 classrooms.

Students from the BCI Academy have went on to graduate from university and have become teachers, engineers, musicians and medical professionals. In 2019, BCI reached a milestone when a graduate enrolled in medical school on a full-ride scholarship. "We have come full circle, with our first group of students now graduating from university and coming back to the school as teachers. Education works. The BCI Academy works," said Strawn of the school's success.

BCI has built the foundation, walls and ceiling for the final phase of the school, but funds have run out for finishing materials, including windows, electrical, desks, and books. BCI is seeking financial partners to contribute any amount towards the completion of the vision to bring a complete, quality education to the world's most vulnerable children. In the midst of a global pandemic, the need has never been more dire.