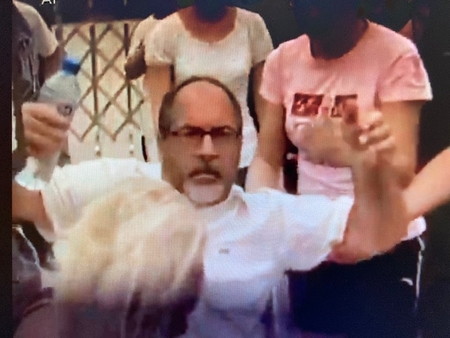 WASHINGTON, April 7, 2021 /Standard Newswire/ -- It would be unconscionable for America and the free nations of the world to participate in the Beijing Games while China is committing genocide against the Uyghur's, oppressing Hong Kong, bulldozing churches, persecuting all religious minorities and trampling free speech and human rights against their own citizens.

Here is a link to a news article of 180 worldwide human rights groups urging a boycott of the Beijing Winter Olympics:  https://thehill.com/policy/international/537363-180-human-rights-groups-urging-boycott-of-beijing-olympic-games.

Rev. Patrick Mahoney, Director of the Christian Defense Coalition in Washington, D.C., has been an outspoken critic of the human rights abuses in China for over 40 years. In 2008, he was involved in an effort to boycott the Beijing Summer Olympics and was arrested in Tiananmen Square (pictured above) during the Olympics speaking out for human rights. He was threatened with six months in prison and is currently banned from China.

"It would be unconscionable for America to participate in the Beijing Olympic Games while China is committing genocide against the Uyghur's, oppressing Hong Kong, bulldozing churches, persecuting religious minorities and crushing free speech and human rights against their own citizens.

"We call upon America and the world not to give the Chinese Communist Party an international propaganda platform before billions of people worldwide through the Olympic Games. How can we honor a country where Uyghur's are living in concentration and forced labor camps, Hong Kong democracy leaders are sitting in prison with no bail, Christian Churches are bulldozed, political and religious dissidents are daily being brutalized and persecuted and so many more human rights atrocities?

"Simply stated, America must say no the 2022 Beijing Olympic Games."

"Hosting the Olympics is an honor that is endorsed by those countries that participate. As China refuses to cease the oppression and genocide of minorities, I ask that the United States again stand against tyranny and oppression by boycotting the Olympic Games in China.

"This is an unprecedented opportunity to hold China to a higher and better standard for safeguarding human rights for people in China, Hong Kong and Taiwan. The United States government must also be an advocate for a return to democracy in Hong Kong. We must loudly urge against any compromises with respect to the human rights abuses occurring under Chinese authority."