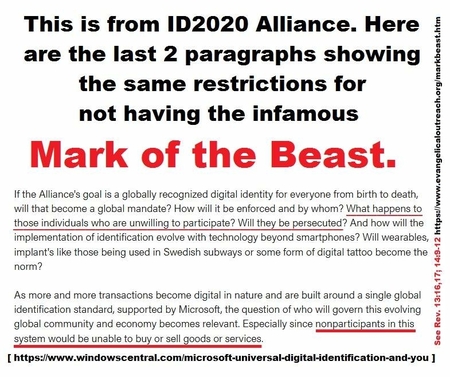 The rapture of the church is definitely biblical, but when will the rapture occur? Will the coming of the Lord Jesus be before (pre), during (mid) or after (post) the great tribulation? If you drop all preconceived ideas and just go by the Scriptures themselves you will see the clarity of the post tribulation rapture doctrine.

Remember this: A wonderful paradise kingdom is awaiting the overcomer who remains faithful to God, even if he has the privilege to die for Jesus before getting there. Ponder Rev. 21:4 and 1 Cor. 2:9 for details. Also, there is NO once saved always saved.

Remember: IF the PRE trib Rapture timing is wrong (which it certainly is) and the Mark of the Beast and the Antichrist surface without a Rapture, then those who believed in the PRE trib Rapture will be HORRIFIED, CAUGHT OFF GUARD and FEEL BETRAYED by believing a lie! Think about it.

DO NOT RECEIVE ANY MARK (or "tattoo") ON YOUR BODY (Lev. 19:28), even if it come with a vaccine; but especially if it is NEEDED TO BUY OR SELL (OR TO BE ABLE TO GO TO BACK TO WORK, TRAVEL, "GET BACK TO NORMAL" OR BE ABLE TO PARTICIPATE IN SOCIETY, ETC).

SHOCKINGLY: ID2020 Alliance actually does say: "nonparticipants in this system would be UNABLE TO BUY OR SELL GOODS OR SERVICES" [https://www.windowscentral.com/microsoft-universal-digital-identification-and-you]. That is the same penalty for not having the mark of the beast (Rev. 13:16,17)!

FAMINE will also precede the post trib rapture (seals 3 and 4 - Rev. 6:5-8). Hence, those expecting the pre trib rapture will be taken off guard with that too! Again, remember Rev. 12:11. You must get born again and die with a pure heart to enter Paradise. Many who start the Christian race do not finish. YOU must be different. Pass these truths on to those you care about.