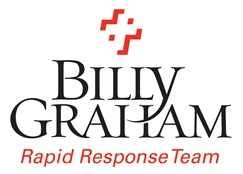 NEWS PROVIDED BY
Billy Graham Rapid Response Team (RRT)
Aug. 4, 2019
CHARLOTTE, N.C., Aug. 4, 2019 /Standard Newswire/ -- Teams of crisis-trained chaplains with the Billy Graham Rapid Response Team (RRT) are on their way to El Paso, Texas, and Dayton, Ohio, following a pair of shootings over the weekend. News reports say 20 people have died and 26 others were injured in El Paso. In Dayton, an additional nine people were killed and 26 people were hurt. RRT chaplains at both sites will work alongside government officials, churches, first responders and with the community at large to provide emotional and spiritual care.
"This is such a difficult time for both of these cities," said Jack Munday, international director of the Billy Graham Rapid Response Team. "In this time of shock, anger, brokenness and incredible loss, we can't imagine the pain and suffering people are feeling from these senseless acts of evil. Yet, we know God hasn't forgotten them, and seeks to heal the brokenhearted and bring comfort to those who grieve."
Initial reports of an active shooter in El Paso began around 11 a.m. Saturday morning, and El Paso police told reporters they had a person in custody by 1 p.m., ending the lockdown of the Walmart and other area businesses. The Dayton shooter, who opened fire while wearing body armor, was stopped by police in less than a minute, potentially saving hundreds of lives.
"Please join me in praying for the grieving families whose loved ones were killed today and for the nearly two dozen more who are injured and being treated in nearby hospitals," Billy Graham Evangelistic Association President Franklin Graham said on his Facebook page following the first incident. "Even the youngest of children were not spared from this senseless evil. Unbelievably, all at a local Walmart. I join with Governor Greg Abbott who said, 'We ask God to bind up the wounds of all who've been harmed.' "
The Billy Graham Rapid Response Team also has chaplains in Del Rio and Laredo, Texas, where they are offering respite and comfort to those who have been granted legal access into the United States. The RRT already has connections to the Dayton area, having sent a team of 22 chaplains following a tornado that ripped through the area in May of this year.
For more information on the ministry, including videos, photos, news articles and an interactive map of former and current deployments, visit www.billygraham.org/rrt. Updates can also be found at www.facebook.com/RRTChaplains.
About the Billy Graham Rapid Response Team:
The Billy Graham Rapid Response Team was developed by Franklin Graham and the Billy Graham Evangelistic Association following the attacks of Sept. 11, 2001. It has since grown into an international network of chaplains in the U.S., U.K., Canada and Australia who are specifically trained to deal with crisis situations. They have deployed to more than 300 disaster sites, including shootings, floods, hurricanes, wildfires and tornadoes.
SOURCE Billy Graham Rapid Response Team (RRT)
CONTACT: Blake Freeland, 704-401-2124, 980-225-2757 cell,  bfreeland@bgea.org
Related Links
www.billygraham.org/rrt