One Nation Under God; Unite in Prayer 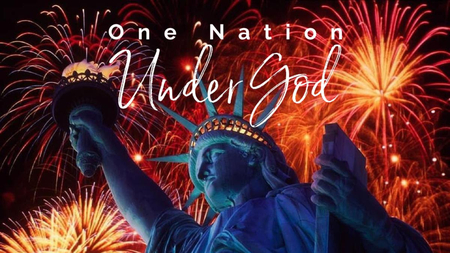 LA CROSSE, Wis., July 6, 2021 /Standard Newswire/ -- October 7th marks the 450th anniversary of the Battle of Lepanto and the Feast of Our Lady of the Rosary. That battle witnessed the "underdog" Christian alliance, nicknamed the "Holy League," claim victory because they stood their ground as an "Under God" united force.

Here we are on the anniversary of our nation's own liberation: 4th of July - Independence Day. We celebrate being liberated from oppressive tyrannical forces.

Today we are facing a historically powerful radical secular tyranny - media, Hollywood, Big Tech, government, universities, etc. - that has joined forces and is now aggressively advancing to seize absolute power and control. Why? Because, as it was 450 years ago, Christianity is "weak and divided."

July 7th marks the one-year anniversary when 77,000 special forces prayer warriors "UNITED" as the U.S. Grace Force to pray together for liberation from demonic forces in our culture.

Our 2021 three-month long prayer campaign again begins with Let Freedom Ring: 40 days to freedom from the devil from July 7th to the August 15th Solemnity of the Assumption. The 6th annual 54 Day Rosary Novena for Our Nation follows from August 15th to the October 7th Feast of Our Lady of the Rosary. Sign up at U.S. Grace Force to receive daily prayers and reflections.

Beyond the Holy Alliance formed through our three-month prayer campaign, everything will culminate in a "final battle" on Sunday, October 10 with the 4th annual Rosary Coast to Coast. Start organizing Rosary rallies and register them at the website. Rosary rallies are encouraged to be in public places: along coasts and borders, at state capitols, in parks, on beaches, along busy streets as well as outside churches and shrines.

Rosary Coast to Coast will be anchored by the 6th annual National Rosary Rally in front of the US Capitol in Washington DC. Plan to join together across the country in praying the Rosary on October 10th simultaneously at: 4 pm Eastern, 3 pm Central, 2 pm Mountain, 1 pm Pacific, noon Alaska, 10 am Hawaii.

Fr. Richard Heilman, founder and spiritual leader of the U.S. Grace Force, calls prayer warriors across the US and beyond: "God is calling YOU to step up as His 'Supernatural Hero' to expel demons and liberate America! Our battle cry is the same of every hero willing to fight for our freedom ... I'M GOING IN!"