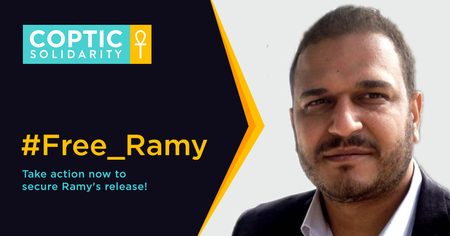 WASHINGTON, June 11, 2021 /Standard Newswire/ -- Coptic Solidarity expresses extreme concern by the continued unjust imprisonment of leading Coptic human rights activist, Ramy Kamel, urges his immediate release and dropping of all fallacious charges against him as stated in our joint letter to President Biden. Kamel's continued imprisonment—now in its 19th month—and similar acts, which are simply inadmissible by international standards, will only ruin the reputation of the Egyptian justice system which appears to be a mere arm of the State Security apparatus.

Mr. Kamel's imprisonment is a direct result of cooperating with the UN, which makes a commensurate response by the UN a moral imperative. Coptic Solidarity submitted a reprisals report on Mr. Kamel's case, to the United Nations on April 28, 2020 for inclusion in the Annual report of the Secretary-General on "Cooperation with the United Nations, its representatives and mechanisms in the field of human rights."

While a group of UN experts (including former UN Special Rapporteur Leilani Farha) published a statement in December 2019, urging Mr. Kamel's release, no other meaningful action has been taken to free Mr. Kamel by the OHCHR.