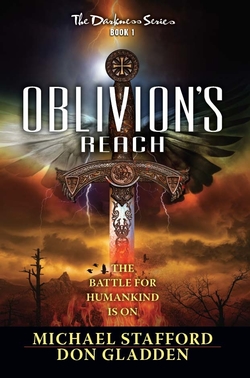 Does that sound a bit like your news feed? It's not – it's tidbits from a forthcoming novel that points the way to the coming end times.

In "OBLIVION'S REACH: The Darkness Series, Book 1," authors Michael Stafford and Don Gladden have teamed up to write a story set in today's American heartland, in an out-of-the-way place called Little Egypt that encompasses the small towns of southern Illinois.

As evil begins to seep into Murphysboro, God's faithful take notice. A band of unlikely heroes, including combat veterans, moves into action to counter the unseen and unknown. Eventually, heaven's army enters the fray to protect and defend.

OBLIVION'S REACH is the first book in a new series that highlights the spiritual battle happening all around us, but largely unrecognized, even by Christians.

Yet co-author Don Gladden, who came up with the concept for the books set in his home region, says he does not think we are living in the end times, but are just on the cusp.

"No, it will get much worse," he says matter-of-factly. "But the trouble we are seeing in our cities, in our government at local and national levels, this all is a warm-up for the days yet to come."

He wants people to see the spiritual battle going on around us.

Gladden and co-author Michael Stafford, a novelist and old college friend, tell a suspenseful story filled with action and a subplot that exposes the intentions of Satan and his Demonic Fallen Angels trying to take over the world. With a cast of likeable and believable characters, Stafford and Gladden pull the reader into the story to cheer on those fighting for the lives and souls of loved ones in their community.

"OBLIVION'S REACH is like a prequel to the famous Left Behind series," Stafford adds. "We've got real people here whose faith needs bolstering but who God uses to defend his own, and there's action and even a bit of romance. OBLIVION'S REACH takes the reader towards the Rapture, building the foundation for what happens next to this band of God's faithful and to America. It becomes apparent that they are not witnessing a skirmish but a prelude to an all-out attack."

The battle between heaven and hell will continue to expand in at least two more books: OBLIVION'S STORM, anticipated for fall 2022, and FINAL OBLIVION, being planned for late 2023.

"We know who ultimately wins the battle, of course," Gladden says, "but people will be lost in the battle if they are deceived by the evil that can appear as angels of light."

Gladden, of Murphysboro, spent 25 years in Christian broadcasting. From his start as a prayer partner volunteer at the TCT Network station in southern Illinois, he rose to become a station manager. Gladden worked in both Christian radio and television, and retired from the TCT Network in Marion, Illinois. He holds a business degree from Southern Illinois University.

Stafford, who lives in the Indianapolis area, also grew up in Southern Illinois. The retired banker and businessman holds an MBA from Southern Illinois University. A Vietnam Veteran and member of the Mystery Writers of America, he has two novels, "Between the Walls of Time" (Historical Fiction) and "The Cotton King" out for representation, with release anticipated in 2022-23.

"OBLIVION'S REACH: The Darkness Series, Book 1" (ISBN- 978-1-952025-52-5, $16.99) will release in May from Carpenter's Son Publishing. It is available from selected bookstores and online retailers. More information: https://www.dongladdenauthor.com.