Surrounded by Danger, Peace-Loving Man Decides it's Time to Fight Back 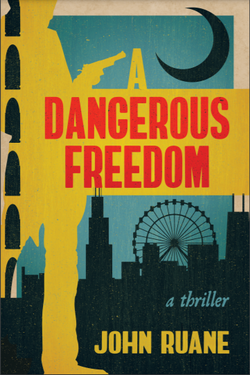 CHICAGO, June 25, 2021 /Standard Newswire/ -- Longtime journalist and critically-acclaimed author, John Ruane, is available to talk about his new thriller novel, A Dangerous Freedom. Ruane has written for the Chicago Sun-Times, Chicago Tribune and Atlanta Journal Constitution. A Dangerous Freedom is his 5th book.

A Dangerous Freedom, a new action-packed thriller-novel, introduces Dylan Reilly, the everyman, who never imagined himself owning or using a gun. But after he and his wife are on the site of three deadly attacks, he purchases a Smith & Wesson six-shooter, trains with a former U.S. Marine and becomes incredibly fast with a gun. Then, like a cowboy from the old west with his six-shooter at his side, he confronts armed and dangerous killers carrying semi-automatic weapons. Reilly knows that if he's not lighting fast and deadly accurate innocent people will die.

"John Ruane has written a compelling story for our times, seen through the lens of Dylan Reilly and a generation coming of age at a time of profound change wrought by globalism, terrorism, fear, and political insecurity. Fast-paced, action-filled, and a moving commentary on war and the state of the post-9/11 world, A Dangerous Freedom is a novel with a statement that will be hard to put down." -- Richard Lindberg, Author and historian.

"Dylan Reilly is the average man, who finds himself in the wrong place at the wrong time. Pushed too far, he is compelled to stand up to the killers and fight back. Readers feel like they are right in the middle of the action alongside Dylan Reilly, who becomes a great American hero, and everyone loves a hero!"

NOW AVAILABLE: A Dangerous Freedom is published by Permuted Press and is now available at bookstores and Amazon.com.