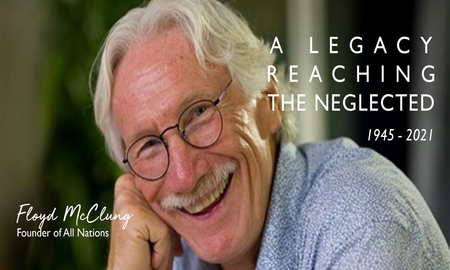 NEWS PROVIDED BY
All Nations International
May 29, 2021

KANSAS CITY, Mo., May 29, 2021 /Standard Newswire/ -- All Nations International Founder Floyd Lee McClung, Jr., global missions leader, bestselling author and international speaker, died on Saturday, May 29, 2021 in Cape Town, South Africa, after an extended illness he had battled since 2016, and which had left him incapacitated, hospitalized and unable to speak for more than five years. He was 75.

In his more than 50 years in full-time ministry, McClung lived in Africa, Asia, Europe and North America, worked on every continent except Antarctica, and authored 18 books, including the international bestseller The Father Heart of God.

A tireless traveler and speaker, McClung spoke and lectured on more than 100 college and university campuses, traveled to more than 190 countries, made dozens of TV appearances, and saw his life and work featured in countless publications, including Time magazine and The New York Times.

After spending his freshman year at Taylor University in Indiana, McClung transferred to Southern California College (now Vanguard University) in 1964, where he was elected student body president and named captain of the basketball team. He graduated in 1967 with a Bachelor of Arts in New Testament Studies.

McClung first joined Youth With A Mission (YWAM) on missions trips during school breaks from college. On a 1965 spring break outreach in Las Vegas, Nevada, he met his future wife Sally. They got engaged in 1966 in Jamaica.

Because dating was not permitted on outreaches, Floyd proposed to Sally by handing her a note while standing in line for refreshments after a meeting. She responded with a note of her own the following day. They married the next year, and celebrated their honeymoon by leading a missions trip to the Caribbean.

"Our married life was full of adventure from day one," said Sally, "although I don't recommend a honeymoon outreach with 75 young people for everyone!"

While newly married, the McClungs traveled the country recruiting young people for summer missions trips to the Caribbean. In 1971, following a yearlong around-the-world outreach ...