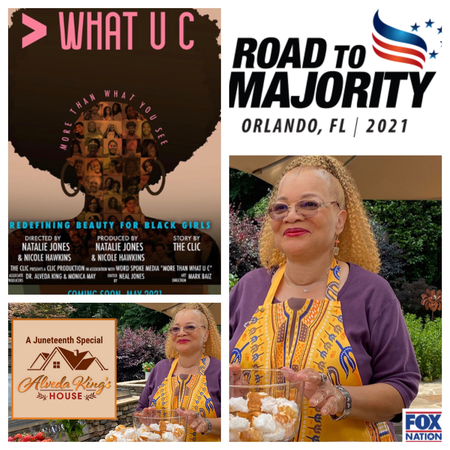 ATLANTA, June 18, 2021 /Standard Newswire/ -- The following is submitted by evangelist Alveda King, she is available for comment:

Tomorrow, for the first time, we will observe Juneteenth as a national holiday. This is a dream come true.

For more than a decade Civil Rights for the Unborn, a ministry of Priests for Life, in concert with the National Black Prolife Coalition, has been working to help make Juneteenth a national holiday.

In 2020, great progress was made when national Black leaders met and prayed with President Donald J. Trump. Juneteenth was a high priority during the discussion. Shortly afterwards President Trump expressed his support from the White House for the initiative.

I'm glad to see that our dream has finally been realized. I thank God, all elected officials, and everyone who helped to get a bill passed and signed into law to make Juneteenth a national holiday.

June 19th marks the day in 1865 when slaves in Texas learned that slavery had ended in the U.S. when President Lincoln's Emancipation Proclamation was enacted on Jan. 1, 1863.

This month with Juneteenth and Father's Day, we celebrate fatherhood, life and freedom. On Alveda King's House and Prolife Praise, we discuss reasons to celebrate.

Also, as we celebrate, the ongoing controversies of systemic racism and the critical race theory are yet dividing and conquering our cries for unity.

Systemic racism does exist in the process of embedding a premise of racism into legal systems of a society. Systemic racism occurs within a government that uses money from people of influence who want to control human populations to elect government officials who will promote their agendas.

What is Systemic Racism? Here's an example: Planned Parenthood founder Margaret Sanger, a renowned racist and eugenicist, helped to promote an agenda of genocide which included birth control to what she considered to be the less needed communities of people on the planet.

In Sanger's own words, Sanger declared that colored people were like "human weeds" who needed to be exterminated. Even though Sanger died years ago, her Planned Parenthood abortion legacy is well funded through private donations and political strategies paying lobbyists to promote the abortion agenda legislatively. See Maafa 21, By Way of Ancient African, Greece and Calvary, Black and Brown Americans In Search of the American Dream and Reparations, Who Should Pay? on Vimeo.

Today many laws are on the books, making abortion a lucrative contender in the system.

Here's another example. Then Sen. Joe Biden, D-Del., helped to escalate marijuana from being a misdemeanor to a federal offense in order to incarcerate low hanging fruit that included the black communities.

Systemic Racism grouped with Critical Race Theory and Darwin's theory of a superior race of humans is a dangerous threat to the survival of the one blood human race.

CRT is ancient, tracing back to when the human race was divided by language in Babylon.

When humans wanted to ascend to power, their common language became confused, and they divided into groups of commonalities which include language, ethnicities, and in some cases, skin color. Eventually, these divisions resulted into false practices and beliefs, including Darwinism.

What is the answer to ending systemic racism, a critical race theory, or racism in general? The answer is simple but yet hard to achieve. The answer is love, especially agape love.

With agape love in our hearts, the word racism will disappear from our vocabularies. Racism exists because we deny the truth. There is only one human race on this planet.

Acts 17:26 declares, "Of one Blood, God made all humans to dwell together on the face of the earth." We are not different races, but one race; one human race.

There is only one critical race; the human race. Yes, we have different skin colors, but that does not denote race; that denotes ethnicity; from the womb to the tomb.

When we deny the ethnicities and identity of others, we commit identity theft. We must not be colorblind.

I was a Georgia State Legislator in 1983 when the MLK Holiday was born. As a cosigner of the bill, I remember the feelings of accomplishment. Now, nearly 40 years later, another dream is realized. Juneteenth is a holiday. Now, what better way can there be to celebrate than opening our eyes to the truth? It is time to let freedom ring for the babies too!

"Have I therefore become your enemy because I tell you the truth?" Galatians 4:16