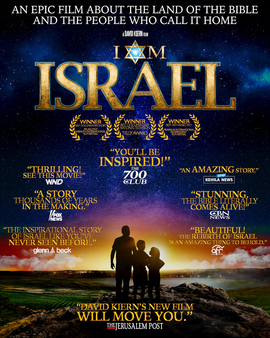 NASHVILLE, June 23, 2020 /Standard Newswire/ -- A documentary film, titled 'I Am Israel,' has achieved the milestone of being shown by over 10,000 Christian congregations worldwide, bolstering Evangelical support for Jewish sovereignty of Judea, Samaria, Jerusalem and the Golan Heights. The film tells stories of Jewish men and women who live in these controversial areas where 85% of the Bible took place, highlighting their deep love of the Land and their personal faith in God.

"Visually and creatively, 'I Am Israel' is designed to show viewers a perspective of Israel they have never seen in secular media," said writer-director David Kiern. "The Jewish characters featured in the film have inspired hundreds of thousands of believers to hold strong to the promises of God for Israel. We believe that as more Christians see the true story of Judea and Samaria, and the Biblical significance of these lands, support for Jewish sovereignty will grow."

Although Christians are generally pro-Israel, until recently, Christian support for Judea and Samaria was insignificant. That has changed dramatically over the last 3 years. The phenomenon is a grass-roots movement, made up of Bible-believing Christians, who see Israel as the Land promised to the Jewish people.

"When we started production on 'I Am Israel,' Jewish sovereignty of Judea and Samaria wasn't being discussed publicly on any significant level," said producer Lance McAlindon. "Today, the issue is a front-page story." The application of Israeli sovereignty to Judea and Samaria (often referred to as the West Bank in media reports) is currently being considered by Israeli Prime Minister Benjamin Netanyahu, who is expected to announce his intentions in the coming weeks.  Its status is a major component of the 'Deal of the Century' framework submitted by the US Administration.

'I Am Israel' has sold over 25,000 copies, screened in over 10,000 congregations, and been seen in 143 countries. It has aired on multiple cable television and streaming networks, and been featured on the 700 Club, Fox News, the Glenn Beck Program, Charisma Magazine, American Family Radio and the Jerusalem Post. The film was invited to screen in the Jerusalem Knesset, the first film produced by Christian filmmakers to achieve this honor.

SOURCE I Am Israel