For one night only, Sight & Sound's new original stage production "DAVID" will come to life around the world – streaming live exclusively on Sight & Sound TV 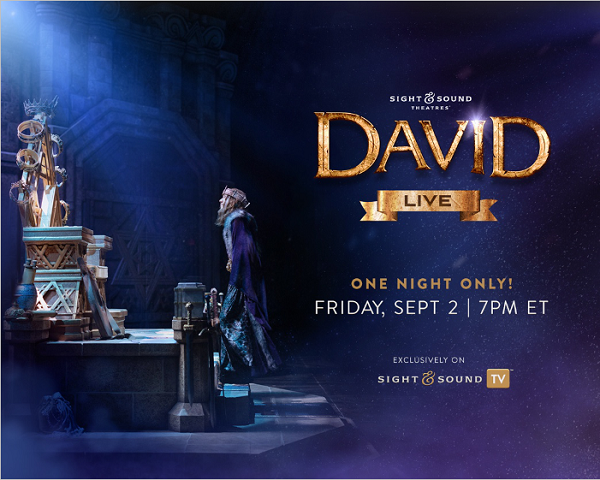 LANCASTER, Penn., July 19, 2022 /Standard Newswire/ -- This September, Sight & Sound® is bringing its state-of-the-art original stage production "DAVID" to screens worldwide in a special live streaming event. Broadcasting from the Sight & Sound stage in Lancaster, PA, "DAVID-Live" will take audiences inside the story of one of the Bible's most legendary figures who rose from shepherd to king after defeating the giant Goliath.

"For nearly 50 years, people from all over the world have been coming to Sight & Sound to experience the Bible coming to life on stage," said Sight & Sound's Director of Marketing & Communications Katie Miller. "We are excited to once again bring the experience of live theater to audiences wherever they are in the world."

With cameras covering the theater from every angle, including on stage and behind the curtain, audiences will have a front row seat to every spectacular moment of the show as it unfolds in real time. The live event will include a 15-minute pre-show and a 20-minute intermission, with exclusive behind-the-scenes interviews and a sneak peek at how the production was created.

"The incredible story of 'DAVID,' the shepherd boy who would eventually become the most famous King in scripture, is a story full of unexpected adventure" says Show Producer Ryan Miller. "The production explores all of the complexities of his life, and how through his triumphs and failures he persevered as a man after God's heart."

In 2020, Sight & Sound launched the online streaming platform Sight & Sound TV in response to the pandemic and as a way for audiences to still experience live theater from their homes. The company's first ever live broadcast "QUEEN ESTHER—Live," attracted viewers from more than 100 countries over Labor Day weekend that same year.

Building on the success of the first live broadcast, Sight & Sound shared "JESUS-Live" over Easter in 2021. Now, for the third time, they'll take a worldwide audience inside the story of one of the Bible's most legendary figures with "DAVID-Live."

Synopsis of "DAVID"
David was a master poet, a fearless warrior, and anointed King. From still waters to shadowed valleys, David's ascent to the throne is filled with towering giants, wild animals and Philistine soldiers.

After unprecedented victories lead to devastating failures, this passionate warrior will face the biggest battle of all: the one within himself. Come alongside this young shepherd on his journey to become a man after God's own heart.

With original music inspired by the Psalms, "DAVID" is a state-of-the-art theatrical experience for the whole family. It was first released live on stage in March 2022. During the production, audiences will see one of the most legendary Bible stories as it comes to life with spectacular special effects, massive sets, and live animals.

Where to Watch "DAVID- Live"
www.sight-sound.tv

About Sight & Sound Ministries
Sight & Sound® is a ministry on a mission to create spectacular entertainment experiences for the whole family. Since its beginning as a traveling multimedia show in 1976, Sight & Sound has inspired over 30 million people with stories of faith. Today, Sight & Sound owns and operates two live theater locations, immersing audiences in state-of-the-art original productions. A streaming television channel launched in 2020, now reaching a global audience in their homes from over 175 countries around the world. Most recently, the expansion into feature films was announced, with a first-ever theatrical release set for cinemas nationwide December 2022. For more information, visit www.sight-sound.com.