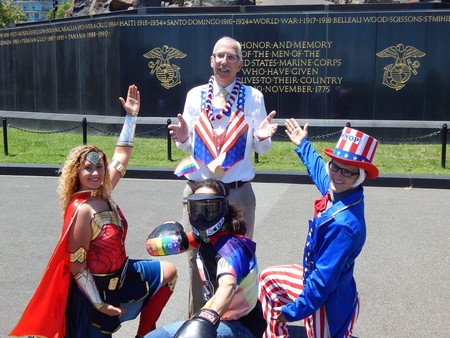 "The LMNOP movement reclaims the Month of June and celebrates one man woman biological reality with singing and dancing celebrations today and permitted performances in Washington throughout June and the entire summer at national monuments with special reverance for this Juneteenth federal holiday. Religious freedom is a key component of ending the current censorship and abuse of all men and women by the woke liberal cancel culture aimed at us.

The songs include LMNOP (Tune of Do Re Mi from the movie The Sound of Music), "Wonder Woman Taylor Greene" (Tune of popular TV Series Wonderwoman) and "#Family"  (To the tune of This Is Me from the Greatest Showman movie).

Wonder Woman, Taylor Greene
All the world's waiting for you,
and the power you possess.

Caring for the Youth,
Fighting for the truth
And the old Red, White and Blue.

Wonder Woman, Taylor Greene
Now the world is ready for you,
and the wonders you can do.

Male and female facts,
Stop a bill in its tracks,
Make a liar tell the truth.

Wonder Woman,
Get us out from under, Taylor Greene
You're a great pro-family advocate.
And the good you demonstrate.

Stop the Leftist cold,
Make the Marxists fold,
Change their minds,
and change the world.