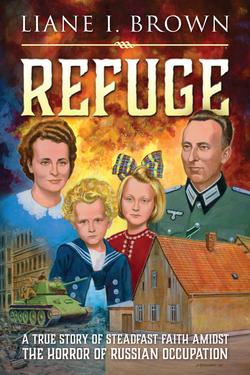 ENUMCLAW, Wash., Oct. 29, 2019 /Standard Newswire/ -- The untold story of the fate of ordinary Germans in East Germany during and after World War II is highlighted in a new release. Refuge and From Fear to Freedom, a re-release by Redemption Press (October 2019) combines both titles, originally published in 1987 and 1993, into one volume. The first person account by Liane I. Brown shares the struggles of her Christian East Prussian family to survive in the midst of the horrors of WW II, and God's faithfulness to them.

The Guddat family fled from East Prussia to a village that was invaded and occupied by the Red Army where they were treated brutally, harassed, and forced to live without sustenance. Fleeing starvation and death, Liane's mother miraculously escaped with her four children to freedom in Berlin. What followed were years of testing and difficulty as they lived in refugee camps in the American and British zones. After a seven-and-a-half-year separation, her father, Emil Guddat, returned from a prisoner of war camp in Algiers and the family was reunited. Liane was the first to emigrate to America with the rest of her family following two years later.