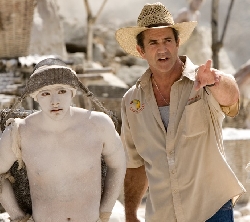 , , Feb. 8 /Standard Newswire/ -- The following is written and submitted for publication by the founder and director of the based Frontline Fellowship, Dr. Peter Hammond:

Mel Gibson's new film Apocalypto has engendered much controversy.  Not that anyone can question the accuracy of his description of the bloodthirsty Mayan civilisation of .  The city states of the jungles of and the peninsula did indeed, like their Aztec neighbours, in what became , worship the sun and engage in wholesale human sacrifice.

The controversy around Mel Gibson's Apocalypto, however is more to do with film critics and journalists claiming that the film is "too violent."  This is an interesting perspective, because all too many of those very same critics have praised blood-splattered films such as Monster (about a lesbian serial killer) and other brutal films with gratuitous violence and no message of redemption.  Rape, murder, even cannibalism, have been routinely promoted as entertainment by these same critics who now so squeamishly reject Apocalypto as "too violent."

What makes the violence depicted by Mel Gibson in The Passion and Apocalypto so unacceptable to these media critics?  Only their Humanist presuppositions about the basic goodness of man, the rejection of absolute standards of right and wrong in the Law of God, and their hostility to Christianity can explain the bold hypocrisy of people who normally revel in violence and decry censorship to want to censor Mel Gibson's films and condemn his realistic portrayal of the gruesome practices of paganism.

Those who find viewing this two-hour epic as traumatic, should spare a thought for how traumatic it must have been for those who had to live under such paganism before the light of the Gospel shone in South and .

Apocalypto starts by focusing on a small tribe of hunters living in the jungles of in the early 16th Century.  They live in primitive huts built with sticks and thatch, wearing very little clothes beyond loincloths and beads.  All participate in tattoos and body piercings including earrings, nose piercings, chin piercings, and other grotesque disfigurements.   Their primitive, but peaceful, existence is suddenly shattered with a raid by the Mayans.  Scores of tribesmen and women are brutally beaten to death, the entire village put to the torch, and all the healthy men and women tied up to poles and force-marched through the lush jungle and across a raging river to the Mayan capital.  They pass by huge earthworks and building sites where thousands of slaves are engaged in constructing the pyramid like temples upon which the Mayans offered human sacrifices to the sun god.  Evidences of the social and cultural decay are everywhere apparent.  Failed crops in the field, whole villages devastated by disease, debasing immorality and popular brutality dominating the society.

Most of the women are sold off into slavery, while many of the men are painted blue and marched through the crowded streets of the city up the scaffolding to the top of a prominent pyramid temple.  They are then exposed to the shocking brutality of paganism in action.  The captives are unbound and forced over a small round altar where a grotesquely dressed high priest raises high the mixtec sacrificial knife, which is made of quartz.   The huge crowds below scream with excitement as the pagan high priest plunges the dagger into the victim's chest and pulls out the still beating heart.

Like the Aztecs, the Mayans believed that the sun required sacrifices of human hearts in order to keep rising and shining each day.  After burning the heart of the still conscious victim in a metal altar dedicated to their sun god, a Mayan priest then chops off the victims head, holds it high for the cheering crowds to see and then rolls it down the steep stairway.  At the bottom, a group of enthusiastic pagans catch the head and impale it, adding to the huge quantity of skulls racked up on poles publically displayed.  Then the decapitated body of the sacrificial victim is rolled down the stairway.  The corpse is added to the huge and growing pile of blue painted headless bodies.

The brutality and cruelty of the Mayan society has been well documented and has been confirmed by archeological excavations which have uncovered huge graveyards of many hundreds of thousands of skeletons, and skull racks with tens of thousands of skulls impaled on poles.  It is estimated that the ritual sacrifice of humans to Aztec gods reached up to 50,000 a year, and by the Mayans over 20,000 a year, before the Spaniards invaded and put an end to this holocaust of human sacrifice.

When the Spaniards arrived on the American continent in the early 16th Century, the Aztec Empire in Mexico had a subject population of perhaps up to 12 million, the Inca Empire in Peru ruled over possibly as many as 6 million.  The rest of the South and Central American continent remained sparsely inhabited with less than 1 million people divided amongst a thousand small tribal societies - each with distinct languages and dialects.  Less than 1 million people lived north of the in what today is the and .

The Aztec Empire exercised harsh military dominion over vassal peoples, who were require to pay heavy tribute, including slaves, for the kind of mass human sacrifices so graphically depicted in Apocalypto.

It is remarkable how many archeologists and historians, while acknowledging that the Aztecs, Mayans and Incas had not yet invented the wheel, continuously describe these societies as "sophisticated", "high cultures", "extremely advanced and complex", with "intricate", economic systems, etc.  While off-handedly acknowledging that their tremendous architectural achievements were actually built by slave labour, and were in fact for human sacrifices (to make the sun rise each day), the enthusiasm and admiration for these decadent and brutal slave masters and mass murderers is extraordinary.  Anyone tempted to join this love affair of so many Humanists for the Mayan and Aztec "civilisations" need to see this film.

Not that Apocalypto is an unrelenting exposé of the brutality of pre-Christian paganism – it is a gripping story of a man's desperate attempts to save his wife and children.  After the initial introduction to the crude and primitive Indian tribe which is about to be targeted by the Mayans, the film is fast paced with a strong sense of jeopardy throughout as the central character, Jaguar Paw, seeks to escape and run back to save his pregnant wife and children, who are trapped in a deep pit near their devastated village.  It is a race against time with a horde of blood-thirsty Mayans on his trail.  The hero of this films needs great stamina and ingenuity to out distance and turn the tables on his brutal and relentless pursuers.

By the time the Christians arrive, we have a far greater understanding of what life was like in before the blessings of European civilisation brought an end to the incessant genocidal tribal warfare, rampant slavery and human sacrifices of idolatrous paganism.  As historian Will Durant observed: "A great civilisation is not conquered from without until it has destroyed itself from within."

Apocalypto should be required viewing for anthropologists, social scientists and others who have been indoctrinated with the Humanistic prejudices against Christianity and infatuation with the supposed superiority of the Aztec, Mayan and Inca "civilisations."

"Their feet are swift to shed blood; destruction and misery are in their ways; and the way of peace they have not known.  There is no fear of God before their eyes." Romans 3:15 – 18