Who is Guilty of Inciting Riots? 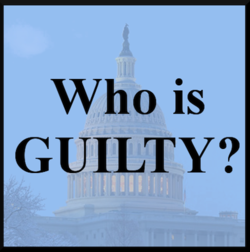 In the wake of the storming of the Capitol, many are blaming President Trump for the violence. Of course, he never instructed anyone to engage in violence. Nevertheless, his critics argue that he stoked people's passions, which he did, and can therefore be held accountable.

If this is the standard—inflammatory rhetoric—then Trump's critics are at best ethically compromised. Consider the following remarks, made by the kind of people who are now hammering the president.

Many more examples could be given. In fairness, these comments, while incendiary, are not direct calls for violence. But it is also true that nothing Trump said was a direct call for violence either.

Left-wing commentators and activists (pretty much the same these days) have no moral authority to lecture the rest of us about violence committed by right-wing protesters. They nurtured a climate of violence over the past year by giving Antifa and Black Lives Matter their blessings.

If they were principled, they would do as the Catholic League does and condemn violent protesters regardless of their cause. But they are not.