'Heart of a Soul Surfer' Set to Premiere in Southern California on Feb. 9; Trailer Available at WalkingOnWater.com 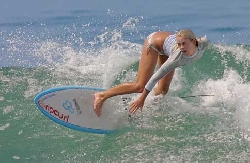 Promising Surfer, Shark-Attack Victim and Bestselling Christian Author Details Her Return to the Water in New Documentary from Walking On Water Films

Yet the attack didn't stop the determined Soul Surfer from giving up and turning her back on surfing. Instead, the attack compelled her to discover her purpose in life as she overcame the loss of her arm and began riding waves just three weeks later.

The documentary "Heart of a Soul Surfer" - which is being released by the San Diego-based Christian surf film company Walking On Water - features exclusive footage of Hamilton surfing and with her family both before and after the attack, including Hamilton's first attempts at surfing with one arm and winning the 2005 NSSA National Surfing Championship just 19 months after the attack.

The documentary is a powerful story told from the heart of a young woman with great passion and dedication to God, said Mike Doyle, Walking On Water's director of outreach. The documentary, he said, digs deep into the heart of 's abiding faith in God, and tackles difficult questions such as, "Why does God allow bad things to happen in our lives?"

Since her attack, has become an international celebrity and appeared on national news shows such as Oprah and The Today Show. She has also authored a bestselling book, "Soul Surfer: A True Story of Faith, Family, and Fighting to Get Back on the Board."

" is really an inspiration to anyone who's facing adversity or questioning the power of faith in their lives," Doyle said. "She's basically taken an event that could've easily ruined someone and used her faith and strong spirit to grow from it and help others."

will be in from Feb. 9 to 11 for special guest appearances at the premieres of her new documentary:

To see a trailer of the film or for more information, visit Walking On Water's website at www.walkingonwater.com

Walking On Water is a Christian non-profit organization dedicated to sharing the Gospel of Jesus Christ. Professional surfer Bryan Jennings started Walking On Water in 1995 with the vision to use his surfing abilities to share his faith with young people. What started as a small surf camp of ten students has grown into a worldwide ministry reaching thousands of people through surf camps and surf films.