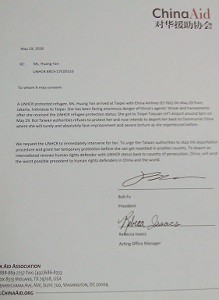 Huang Yan, who fled China last year after her doctors were pressured to abruptly cancel critical surgery for her ovarian cancer on account of her human rights defense. She settled with her husband in a Southeast Asian country, and ChinaAid successfully raised money for her treatment. Since then, she has been scrambling to attain legal status in a free country and has lived in Thailand and Indonesia.

Yesterday, Huang boarded a plane for Taiwan, where the government granted her three months of legal stay, and she arrived at Taoyuan International Airport that night. Huang was held in the airport until the next day.

According to a ChinaAid appeal (pictured) issued to the United Nations High Commissioner for Refugees (UNHCR) on May 29, the branch of the United Nations responsible for safeguarding refugees, Taiwan originally planned on deporting Huang to China, where she would have faced "imprisonment and severe torture as she experienced before." The appeal urged the UNHCR to intervene, since Huang previously suffered repeated house arrests, imprisonment, beatings while pregnant and subsequent miscarriages, and a lack of medical treatment while in police custody, and obtained status as a UNHCR refugee in 2016.

"To deport an international renown[ed] human rights defender with UNHCR status back to [the] country of persecution, China, will send the worst possible precedent to human rights defenders in China and the world," the statement, which was signed by ChinaAid's president and founder, Bob Fu, read.

Afterwards, Taiwan granted her three months of stay within the country, and she was released from the airport today.

The Taiwan Association for China Human Rights (TACHR), learned of Huang's imminent arrival when she was in the air, and provided immediate assistance in securing her ability to stay within the country. TACHR's president, Yang Sen-hong, and his wife met Huang at the airport.

"So thankful for the Taiwanese government's timely and humane treatment and decision on behalf of the persecuted Christian human rights defender, Ms. Huang Yan, who they granted three months' stay in Taiwan, where she can wait peacefully for a resettlement country as a UNHCR protected refugee," Fu said today. "Thanks to our partner organization, the Taiwan Association for China Human Rights, for their immediate support. God bless you all."

Huang's rights defense work included advocacy on behalf of Gao Zhisheng, an internationally recognized Christian human rights lawyer who has suffered repeated imprisonment and torture for legally defending Christians and practitioners of the peaceful spiritual Falun Gong who were targeted by the government for their faiths.

ChinaAid seeks resettlement opportunities for refugees such as Huang in order to encourage and support them in their activism and defend human rights, religious freedom, and rule of law.