Dr. Michael A. Milton Releases 'From Flanders Fields to the Moviegoer: Philosophical Foundations for a Transcendent Ethical Framework' 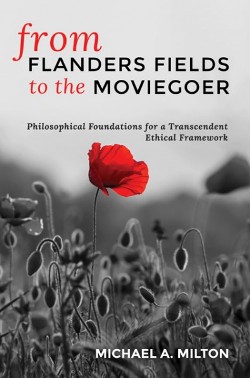 DUE WEST, S.C., Nov. 6, 2019 /Standard Newswire/ -- Soldiers return from war asking "What is good? What is evil? Right? Wrong? How do I make sense of war?" They are not alone. Physicians, military officers, educators, clergy, attorneys, and the concerned public must also come to terms with meaningful, workable ethics in an age that eschews any attempt to define truth and error. A new work by Michael A. Milton on ethics is providing help.

Dr. Michael A. Milton draws on English literature, sociology, history, public policy, and theology to mark milestones in the cultural journey from the philosophical crisis after World War I, the end of modernity, to the "theater of the absurd:" post-modernity. Rather than merely a survey, this new monograph maps a "way forward" in teaching metaphysical ethics that Milton calls "Mother's Knee Ethics."

Originally presented to American and British defense leaders in Washington, DC, Milton's paper is now expanded for use in undergraduate, graduate, and postgraduate classrooms, as well as libraries, and professional military education. Wipf and Stock Publishers has selected Milton's book as part of their continuing engagement with ethical issues in Church and Society. Chaplain (Brigadier General) Doug Lee, the Executive Director of Chaplain Alliance for Religious Liberty, offered a summary of Milton's new work:

"Dr. Michael Milton offers a thoughtful, historical, and logical solution for some major challenges of the twenty-first-century military: suicides are increasing, PTSD is wanton, and modern 'philosophies' are not helping battle-scarred warriors. His proposal to return to a 'transcendent ethic' is convincingly 'on target.'"

As an author, Milton has penned over thirty books, including Silent No More: Why the Church Must Speak Biblically to State and Culture, lauded by conservative voices like David Limbaugh and Michael Reagan.

Michael A. Milton, PhD, MPA (Wales; UNC Chapel Hill) is the Provost and James H. Ragsdale Chair of Missions and Evangelism at Erskine Theological Seminary. The former Chancellor-President of Reformed Seminary, Milton is an ordained Presbyterian minister (PCA, ARP) and served as senior minister of the historic First Presbyterian Church, Chattanooga He planted three churches in Kansas, Georgia, and North Carolina. Dr. Milton is a retired Army chaplain (colonel) after thirty-two years of service. Among other duties, Milton educated military officers in ethics at the Army Chaplain School. Dr. Milton was nominated and appointed as the senior command chaplain of US Military Intelligence (Army Reserve), overseeing a global ministry mission to support America's intelligence efforts.

Dr. Milton and his wife, Mae, reside in North Carolina. Further information about Dr. Milton is available at http://michaelmilton.org/about.

(The book is available through all bookstores, including Amazon and Barnes and Noble; and the publisher maintains a page with media kit: https://wipfandstock.com/from-flanders-fields-to-the-moviegoer.html.)

For the full release go to https://seminary.erskine.edu/from-flanders-to-the-moviegoer/