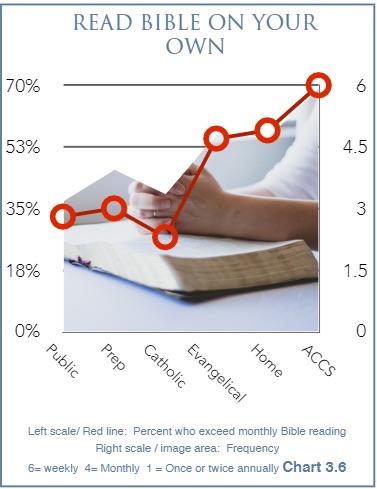 BOISE, Idaho, Feb. 6, 2020 /Standard Newswire/ -- The Classical Difference today released a groundbreaking study completed by the University of Notre Dame's Sociology department showing that graduates of ACCS schools are more likely to practice spiritual discipline and remain engaged with their faith compared to alumni of other educational institutions and many Christian-raised Millennials.

"It comes as no surprise to us that ACCS graduates are more likely to stay engaged with their faith," said ACCS President David Goodwin. "This is the expected result of training students under the Paideia model, which reveres the role of educators to sow good seeds among pupils by helping them to establish a biblical worldview. Clearly, the consequences of training a child to put the Lord first in all areas are lifelong."

Answers from the Christian commitment section of the study found that 90% of ACCS alumni attend church three times per month or more, 83% go to weekly small groups and 70% read their Bibles weekly. Furthermore, 80% contend that they have an obligation to practice spiritual disciplines. This could explain why ACCS graduates are 2.6 times more likely to pray alone, while protestant school alumni, their closest competitor in this area, are only 1.9 times more likely to pray alone. By a significant percentage, they also read religious literature outside of Scripture more often than other alumni.

"These results contradict the rising trend of Millennials leaving the church and neglecting their faith, despite being raised in a Christian home," said Goodwin. "Against the odds, ACCS alumni prioritize an active relationship with God."

One interesting result of the study showed that a significant 45% of ACCS graduates have doubts about their spiritual beliefs, which was higher than the response among Evangelical and Homeschool graduates.

"To us, this was an encouraging find," said Goodwin. "It shows that most students who have an ACCS education are not simply more likely to maintain their faith, but they also have a healthy level of curiosity and are willing to express doubts and find answers."

In addition to practicing faith in their homes and church communities, ACCS alumni are the most likely to seek a job that fulfills their religious calling, even if it means taking less pay than another position would provide. Behind religious calling, the other top priorities for an ACCS graduate in selecting a job were the ability to be creative and help others in the workplace.

Founded in 1994, the ACCS currently represents 300 schools nationwide, having graduated approximately 50,000 students. ACCS ranks about 6th by the number of schools represented as reported by the National Center for Education Statistics and is the only association of Christian schools to continually grow over the past 15 years. The Classical Difference is the publishing division of the Association of Classical Christian Schools.

About The Association of Classical Christian Schools
Established in 1994, the ACCS represents 300 schools across the country and has graduated approximately 50,000 students. Organized to promote, establish and equip member schools that are committed to a classical approach in the light of a Christian worldview, the ACCS is the primary public advocate for classical Christian education. To learn more about the ACCS, visit classicalchristian.org.