Kendrick Brothers' SHOW ME THE FATHER, Their First Documentary, Set for September 2021 Release 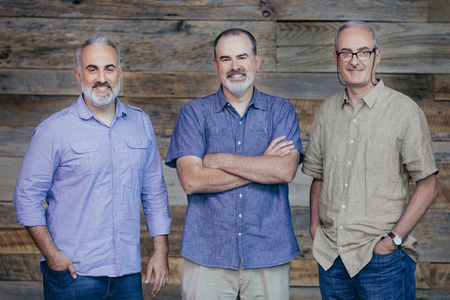 As their first documentary release, the Kendrick Brothers' SHOW ME THE FATHER aims to surprise viewers with captivating stories interwoven with inspirational truths about the fatherhood of God. The Kendrick Brothers will once again take moviegoers on an incredible cinematic and emotional journey in this powerful film coming to theaters nationwide September 10, 2021.

"Everyone has a father story, but not everyone has learned how to redeem it for their own good and the good of others" said executive producer Stephen Kendrick. "Even though fatherlessness is directly connected to so much brokenness in today's world, we wanted to go beyond traditional documentaries and show how God is the perfect Father and can amazingly provide the love and healing to anyone at any stage in life."

From Sherwood Pictures, Provident Films and Sony Pictures' AFFIRM Films, COURAGEOUS Legacy releases in theaters nationwide October 15, 2021. COURAGEOUS Legacy is a remastered re-release of the Kendrick Brothers' classic film that has been impacting fathers and families around the world since its initial release 10 years ago.

"In September 2011, COURAGEOUS was estimated to open at the box office with $1.5 million and it ended the weekend the #1 new movie, with $9.4 million in the first frame," said Rich Peluso, EVP/Head of AFFIRM Films. "We are thrilled to bring this incredible story to theaters with new footage, as well as bring to the big screen the Kendrick Brothers' first documentary."

"We're humbled and gratified that COURAGEOUS is continuing to make a global impact," said director Alex Kendrick. "The Lord has been graciously using this film all over the world for a decade and we can't wait to see how the film is received by a new generation of fathers and their families."

Both movies are releasing in a cross promotional effort and promise to leave audiences inspired and challenged.

About AFFIRM Films
AFFIRM Films, launched in 2007, is an industry leader in faith-based/inspirational film with worldwide box office of over $580 million including such hits as SOUL SURFER, WAR ROOM, RISEN, HEAVEN IS FOR REAL, MIRACLES FROM HEAVEN, OVERCOMER and most recently A BEAUTIFUL DAY IN THE NEIGHBORHOOD in partnership with TriStar Pictures. AFFIRM produces, acquires and markets content that inspires, uplifts and entertains audiences around the world focusing on family and faith. Sony Pictures Entertainment is a subsidiary of Tokyo-based Sony Corporation.

Register to get all the latest news from AFFIRM Films at www.affirmfilmsupdates.com and follow AFFIRM Films on social media at @AFFIRMFilms.

About Provident Films
Provident Films creates entertainment that inspires audiences to believe in God’s purpose for their life. Since 2006, the company has pioneered the faith-based film genre yielding over $280MM in box office sales. The company produced industry hits such as Kendrick Brothers' OVERCOMER, WAR ROOM, COURAGEOUS, FIREPROOF, FACING THE GIANTS, and the Erwin Brothers' WOODLAWN, MOMS' NIGHT OUT, and I CAN ONLY IMAGINE. Most recently Provident Films produced BLUE MIRACLE in partnership with Netflix.

Provident Films is part of the Nashville-based Provident Entertainment, a division of Sony Music Entertainment. For more information, go to ProvidentFilms.org.

About Kendrick Brothers Productions
Kendrick Brothers Productions is led by brothers Alex, Stephen and Shannon Kendrick and exists to glorify God by inspiring audiences of all ages with resources that positively impact their faith, families, and personal relationships. By blending entertaining stories with doctrinal integrity, the Kendricks have produced theatrical films, books, and group curriculum with a growing international reach.

2021 marks the 10th Anniversary Legacy Edition release of their hit film COURAGEOUS and also the debut of the filmmakers' first, feature-length documentary, SHOW ME THE FATHER.

The Kendricks began their journey in 2003 with the production of the micro-budget film, FLYWHEEL, which has now sold over a million copies in DVD format and paved the way for the following theatrical releases: FACING THE GIANTS, FIREPROOF (#1 Independent Movie of 2008), WAR ROOM (#1 at the US box office) and OVERCOMER (#1 Inspirational movie of 2019). The Kendrick Brothers’ body of work has been credited with helping create the subcategory known as faith-based films. They are currently in production on their 7th feature film.