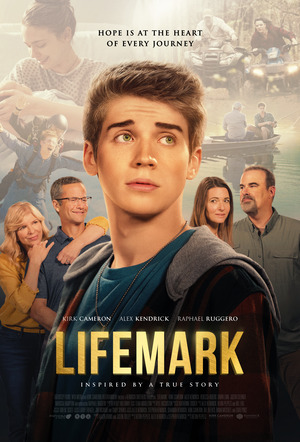 NASHVILLE, Sept. 14, 2022 /Standard Newswire/ -- Fathom Events and WTA Media announce the successful opening weekend of LIFEMARK, which premiered in theaters nationwide on September 9th, delivering $855,152 in ticket sales for a 3rd place finish on opening night. The film continued to play strong throughout the weekend and into the week with the third highest per-screen-average. Its current cume is just under $3mm.

The distribution was handled via Fathom Events, which created a unique seven-day theatrical run. With the high demand for this title, Fathom has extended the theatrical run an additional week, with potential for even more dates to be added. Typically Fathom Events are one, two or three night events.

"“We are thankful this story of celebrating adoption was welcomed with open arms nationwide," said Executive Producer and actor Kirk Cameron. "Despite the odds against a faith release such as this one, we appreciate this audience, who once again demonstrated their desire to see wholesome family entertainment."

"Fathom Events was excited to partner with the Kendrick Brothers and Kirk Cameron on LIFEMARK," said Ray Nutt, CEO of Fathom Events. "We believed in this film so much that we created the opportunity to premiere it in theaters nationwide for a seven-day limited engagement so that audiences have more opportunities to see the film."

"We're so appreciative to the audience and to Fathom Events," said actor and Executive Producer Alex Kendrick. "The stories coming out of theaters this weekend are proof that this film is bringing hope to many."

Based on the documentary 'I Lived On Parker Avenue,' LIFEMARK is the true story of a young man's journey as he sets out to meet his birth parents. With a talented cast, including Kirk Cameron ("Growing Pains," FIREPROOF), Alex Kendrick (COURAGEOUS, OVERCOMER), Rebecca Rogers (WALKING IN SOUTHPORT, TEXAS REIN), Dawn Long (TREASURE LIES, COWBOYS), Raphael Ruggero (THE ASSIGNMENT), Justin Sterner ("American Detective," KID COMBAT) and Marisa Hampton (THE RELIANT, "Dynasty"), LIFEMARK is a reminder that one courageous decision can change everything.

David's comfortable world is turned upside down when his birth mother unexpectedly reaches out to him, longing to meet the 18-year-old son she's only held once. With the encouragement of his adoptive parents, David embarks on a journey of discovery that leads to a staggering truth from his past. From executive producers Kirk Cameron and the Kendrick Brothers—creators of WAR ROOM and FIREPROOF—comes LIFEMARK, based on an incredible true story that celebrates adoption, reconciliation, and love.

About Fathom Events
Fathom is a recognized leader in the entertainment industry as one of the top distributors of content to movie theaters in North America. Owned by AMC Entertainment Inc. (NYSE: AMC); Cinemark Holdings, Inc. (NYSE: CNK); and Regal, a subsidiary of the Cineworld Group (LSE: CINE.L), Fathom operates the largest cinema distribution network, delivering a wide variety of programming and experiences to cinema audiences in all the top U.S. markets and to more than 45 countries. For more information, visit www.FathomEvents.com.

About Kendrick Brothers Productions
Kendrick Brothers Productions is the company of brothers Alex, Stephen and Shannon Kendrick that exists to honor God and share the truth and love of Jesus Christ through movies, books, curriculum and speaking. By blending engaging stories with doctrinal integrity, the Kendricks seek to encourage and inspire audiences with resources that positively impact their lives and strengthen their faith, families, and personal relationships.