2021 Could Be 'Best Year Ever' for America's Nonprofits, New Report Suggests

90% of donors expect to give same -- or more -- to charity this year, says new study by DickersonBakker 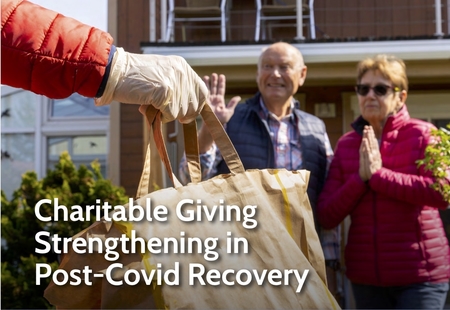 'BEST YEAR EVER' FOR AMERICA'S NONPROFITS? A new report on charitable giving suggests America's nonprofit organizations are on track for possibly their best fundraising year ever, even in the midst of the pandemic. The new study by DickersonBakker (www.DickersonBakker.com) of people's giving intentions across the nation shows a whopping 90% of donors expect to give the same -- or even more -- to charity this year compared with last year, which smashed records.

RALEIGH, N.C., Sept. 14, 2021 /Standard Newswire/ -- A new report on charitable giving suggests America's nonprofit organizations are on track for possibly their best fundraising year ever, even in the midst of the pandemic.

The new study of people's giving intentions across the nation shows a whopping 90% of donors expect to give the same -- or even more -- to charity this year compared with last year, which smashed records.

"It's great news for America's nonprofit organizations -- and the millions of people they help," said Derric Bakker, president of DickersonBakker (www.DickersonBakker.com), a leading nonprofit consultancy firm that conducted the survey of 1,149 mostly faith-based donors during June and July.

During the pandemic, many nonprofits -- especially those helping the homeless, hungry, and people who've lost their jobs -- have been struggling to meet the avalanche of needs in their communities.

"Given the accelerated demand for services, many nonprofit leaders have been nervous about how the pandemic might affect charitable giving, which is often the primary way they receive funding to support their work," Bakker said. "Our comprehensive survey shows that donors are stepping up to meet the increased burden -- the vast majority say they intend to give as much as they did last year, or more, especially during the all-important holiday season when many nonprofits receive up to 40% of their total annual revenue."

2021: Another Record Shattering Year?
DickersonBakker has an impressive track record of forecasting trends in charitable giving.

A similar survey conducted by the North Carolina-based company last year forecast donations to charities would be strong in 2020, despite the pandemic, and the prediction proved accurate. Charitable giving grew 5.1% in 2020 to $471 billion, making it a record-breaking year and shattering expectations.

"Our research shows a large majority of donors are confident in their financial security and optimistic about the future of the economy," the new report says. "At the same time... donors are mindful that many people are still in need, and they have no intent to throttle back on their charitable giving."

At the time the survey was conducted, more than two out of every three donors said they felt the COVID-19 crisis had "largely passed," and fewer than one-in-three felt it was still a "significant problem" in their area.

Donors 'Eager for Normal'
People were "increasingly eager to get back to normal and come out to donor events again," Bakker said.

More than seven out of every 10 donors said they'd be willing to meet in-person with fundraisers or attend a small-scale fundraising event. About six-in-10 said they'd attend a large donor gathering now, with nearly eight out of 10 saying they'd be ready to go to a big event by year's end. Older donors -- age 65-plus -- were more reluctant to attend in-person events.

"Nonprofits should do everything they can to put hay in the barn now while the sun is shining," Bakker said. "People are feeling economically secure, they're feeling generous, and they see the real need around them. Who knows what's going to happen in the future. But, for the coming holiday giving season, there's plenty to be optimistic about."

DickersonBakker (www.DickersonBakker.com) has been providing professional fund development consulting services to nonprofit organizations for more than 35 years. With offices in Texas and North Carolina, and full-time consultants in several states, the firm has served hundreds of nonprofits -- particularly faith-based organizations -- located across the U.S., Canada, and overseas.