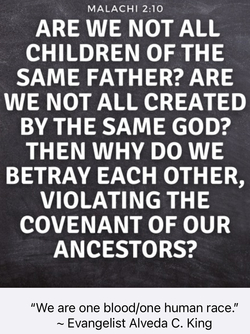 ATLANTA, May 28, 2021 /Standard Newswire/ -- The following is submitted by Evangelist Alveda King and she is available for comment:

What is systemic racism? Systemic racism occurs within a government that uses money from people of influence to elect government officials who will promote their agendas.

For example, Margaret Sanger, a renowned racist and eugenicist, helped to promote an agenda of genocide which included birth control to what she considered to be the less needed communities of people on the planet. In her own words, Sanger said that colored people were like "human weeds" who needed to be exterminated.

Here's another example. Then Senator Joe Biden helped to escalate marijuana from being a misdemeanor to a federal offense in order to incarcerate low hanging fruit that included the black communities.

What is the answer to ending systemic racism or racism in general? The answer is simple but yet hard to achieve. The answer is love, specifically, agape love.

If we all had agape love in our hearts, then the word racism would disappear from our vocabularies because in order for racism to exist there would have to be different races that hated each other. Until it is definitively determined that aliens (not as in immigration) exist and are visiting our planet, there is only one human race on this planet.

Acts 17:26 says, "Of one Blood, GOD made all humans to dwell together on the face of the earth." We are not different races, but one race; one human race.

There is only one critical race; the human race. Yes, we have different skin colors, but that does not denote race; that denotes ethnicity; from the womb to the tomb.

When wanting to let others know that someone is not a racist, some say that they are colorblind. They want people to know that they do not see anyone as a black, white, yellow, or whatever color person. In reality, the state of colorblindness is a medical condition. If you are colorblind then you need a doctor. Jesus adds sight to the blind.

When we don't see the color of other human beings, we don't see their beauty and their God-given ethnicity that they represent; all the culture, all the history, all the values. God made us all in living color.

When we deny the ethnicities and identity of others, we commit identity theft.