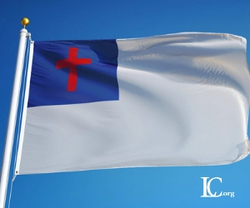 BOSTON, July 9, 2019 /Standard Newswire/ -- Liberty Counsel has asked a federal district court to forgo a trial and order the city of Boston to allow its resident Hal Shurtleff and his Christian civic organization, Camp Constitution, to fly the Christian flag on a city flagpole that Boston has opened to hundreds of other organizations. The city censored the religious viewpoint of the flag that would have been raised only during a one-hour event held to commemorate the civic contributions of Boston's Christian community on Constitution Day (September 17).

The city has allowed other civic and cultural organizations the freedom to raise their flags on the city hall flagpoles to commemorate whatever events are important to the organizations more than 300 times since 2005, and nearly 40 times just in the year preceding Camp Constitution's request. The city's application policy refers to the flagpoles as a "public forum" open to "all applicants." City officials have never denied the "messages" communicated by Boston Pride and the pink and blue "transgender" flag, and even the flags of Communist China and Cuba, but will not allow the civic and historical Christian message of Camp Constitution.

When Camp Constitution asked the city in 2017, and again in 2018, for permission to raise the Christian flag on the City Hall flagpoles to commemorate Constitution Day and the civic and cultural contributions of the Christian community to the city of Boston, the Commonwealth, religious tolerance, the Rule of Law, and the U.S. Constitution, city officials denied the permit based on a secret, unwritten and unconstitutional "policy" of refusing religious flags.

"Censoring religious viewpoints in a public forum where secular viewpoints are permitted violates the First Amendment," said Liberty Counsel's Founder and Chairman Mat Staver. "Boston city officials may not ban the Christian flag as part of a privately-sponsored event when they allow any other flag by numerous private organizations. It's time for the court to stop the city's unconstitutional censorship," said Staver.

Liberty Counsel is an international nonprofit, litigation, education, and policy organization dedicated to advancing religious freedom, the sanctity of life, and the family since 1989, by providing pro bono assistance and representation on these and related topics. Liberty Counsel provides broadcast quality TV interviews via Hi-Def Skype and LTN at no cost.