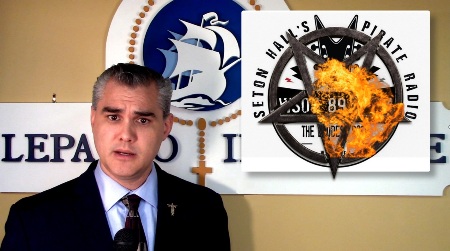 NEWARK, N.J., Sept. 14, 2020 /Standard Newswire/ -- Seton Hall University, which falls under the direct authority of the Archdiocese of Newark, responded to hundreds of complaints about its radio station by claiming that the recent report published by the Lepanto Institute was "misinformation." Catholics from all over the country had written to Seton Hall because of the violent and satanic content of its broadcasts.

Seton Hall's response claimed that its radio station, WSOU 89.5 FM, "must meet strict FCC standards" and "even stricter University standards for content." WSOU's FAQ page even claimed "the music played on WSOU is actually much more family-values friendly" than what is commonly heard on "hit radio station."

Responding to Seton Hall's form letter, the Lepanto Institute created a video report which included recordings from WSOU's own radio station, along with lyrics of the graphically violent and demonic content. The new report can be viewed here.

"WSOU actually broadcast a song called 'Forced Gender Reassignment' by the band 'Cattle Decapitation,'" said Michael Hichborn, president of the Lepanto Institute. "This song is about chaining down a Christian couple who oppose transgenderism, and graphically mutilating their genitals. Is this the kind of thing Seton Hall claims is in accord with their 'strict university standards'?"

The Lepanto Institute's video report also shows that WSOU aired a song by The Misfits which explicitly calls for the decapitation of 'little girls,' while another song titled The Grand Conjuration literally calls for a demon to enter the body of the singer.

"We have hundreds of hours of recordings of WSOU's broadcasts proving without any doubt that it is broadcasting unmistakably satanic and graphically violent songs," said Hichborn. "There is absolutely no excuse for a Catholic-owned radio station to be broadcasting material so diametrically opposed to the mission of salvation of the Catholic Church, which is why we are demanding that Cardinal Tobin take immediate action to shut the station down."

The Lepanto Institute has launched a petition addressed to Cardinal Tobin, demanding that WSOU be shut down immediately.

The Lepanto Institute for the Restoration of All Things in Christ is a research and education organization dedicated to the defense of the Catholic Church against assaults from without as well as from within. Founded in 2014, the Lepanto Institute has exposed several instances of Catholic or Catholic-affiliated organizations being directly involved in events or other matters directly contrary to Church teaching.