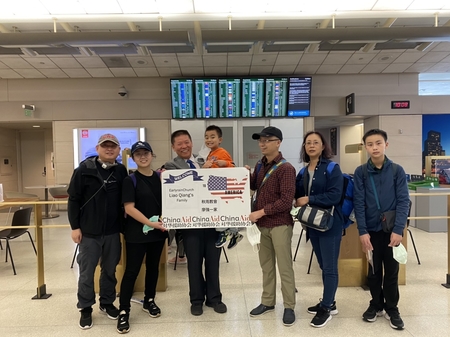 The Liao family being welcomed to the U.S. by Bob Fu (pictured third from left). (Photo: ChinaAid)

SAN FRANCISCO, June 29, 2021 /Standard Newswire/ -- Liao Qiang, a church member of the Early Rain Covenant Church in Chengdu, and his family fled to Taiwan from China in July 2019 after repeated interrogation and harassment by the police. Today, the family of six arrived safely in the United States where they will apply for asylum.

On December 9, 2018, Early Rain Covenant Church was raided by the government. Hundreds of believers were interrogated and some were arrested. Thus, in just one night, the church suffered an overwhelming disaster and lost its pastors, elders, theological seminary, church school, and church building.

Church members who were released after their arrests disclosed that some believers were forced to take unknown drugs and give false statements against church leadership during their detention, with the intention to make others believe that the church was involved in illegal activities. If they were to disobey, they would be put in handcuffs and shackles, their hands and legs tied together, and deprived of sleep for up to ten days.

Liao Qiang and his family were implicated. They were repeatedly questioned and had their interrogations recorded by the police. "In fact, every time I was summoned, I would still be nervous. When they took me into the car, I would be situated in the middle between several people. And then you would have no clue what is going to happen next," Liao Qiang recalled.

Before the 2019 Lunar year, Liao Qiang and his family planned to invite the arrested church elders to have a New Year's Eve dinner. However, the information was leaked. Liao was handcuffed and had his movements restricted for 24 hours.

Liao's determination for freedom was also prompted by the threats posed toward his child, Wen Wen. The Chengdu Police threatened to forcefully take away his adopted child even though he possesses the adoption certificate issued by the government. He was three years old at that time and had fibrosarcoma, a malignant tumor. Liao recalled the police telling him that Wen Wen grew up in a "cult family" and must be saved. He continued, "When I adopted my child, he was only three years old. If the authorities take him away, I will not get him back."

In late 2018, Liao's daughter, Ren Ruiting, and his son-in-law, Peng Ran, were stopped for investigation in the streets of Chengdu. Peng recounted, "On December 16, I was walking on the streets with my wife on this day when the police pinned our phone locations. We thought to ourselves that something was unusual. After we walked out of the shopping center, a police car charged and sped to a stop next to us. A black car then followed and blocked us in front, then the car of the other person who first appeared outflanked us from the back. It was just like the action movies we watched on the television, the kind that shows the criminals being caught."

To avoid the harassment and surveillance by the local government, Liao and his family planned to flee China. The group left Sichuan and then flew to Thailand on July 1, 2019. Finally, they arrived in Taiwan on a medical visa a few days later on July 4.

The family has spent nearly two years in Taiwan. During the period, the National Immigration Agency of Taiwan approved extending their stay. Taiwan's Refugee Law has yet to come into law meaning the relevant processing mechanism for mainland Chinese citizens applying for asylum is incomplete. Therefore, they were unable to work legally and could not stay in Taiwan permanently.

However, based on the universal value of human rights, Liao and his family were encouraged by the protection and the spirit of humanitarianism from local organizations. During their stay in Taiwan, the Liao family received the care of many Taiwanese people from different spheres of life. Under the coordination of the Taiwan Association for China Human Rights (TACHR) and the Presbyterian Church in Taiwan, the life and resettlement of the Liao family in Taiwan was wholeheartedly supported.

Dr. Bob Fu, President of China Aid Association, expresses his gratitude to all parties for their generous help during their stay in Taiwan. "Thanks to the cooperation and arrangements of the U.S. and Taiwan government. And special thanks to ChinaAid's ministry partners in Taiwan - the Presbyterian Church in Taiwan and Taiwan Association for China Human Rights, for the cordial hospitality towards the family of Ren Ruiting during their stay in Taiwan. We pray for the end of this era of despotism and exile and welcome the day when religious freedom in China arrives."

ChinaAid welcomes the Liao family to the United States where they will be free to practice their religion without the intervention by the Chinese Communist Party.

China Aid exposes abuses in order to stand in solidarity with the persecuted and promote religious freedom, human rights, and rule of law. If you wish to partner with us in helping those persecuted by the Chinese government, please click here to make a charitable donation.