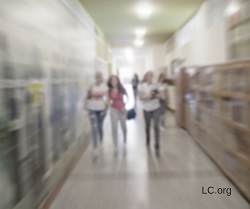 EMMAUS, Penn., June 29, 2018 /Standard Newswire/ -- Liberty Counsel has demanded that the East Penn School District immediately provide parents with the specific links to the four YouTube videos the district showed to more than 2,000 students at Emmaus High School on the school TV system. The district showed the videos, which promoted homosexuality, same-sex "marriage" and gender dysphoria, to the students as part of the district's "Unity Week" and promotion of GLSEN's "Day of Silence."

GLSEN is a political activist organization and the nation's largest homosexual advocacy group focused on promoting same-sex sexual activity and gender confusion to public school students as young as kindergarten. The Gay-Straight Alliance (GSA) is the student activism arm of GLSEN.

The school district denied parent requests for the video links, stating the videos "were pulled from YouTube and other online sources by the students in our GSA club and sent to the TV studio as part of their 'Day of Silence' project." The district’s attorney advised "that these videos cannot be sent to [parents], because they are part of a student project," despite the district playing the videos for all students. Parents are left to try to find the videos on their own based on descriptions of the video content provided by the school district, and descriptions of the video content as related by their children:

Video 4 – Entitled "Show your pride. Share your love," described by children to their parents as encouraging them to embrace the homosexual lifestyle.

Liberty Counsel is demanding not only the links of these videos, but all public records relating to the 2018 event. The district required the high school students to view these videos, without prior notice to their parents or an opportunity to opt-out, which is a violation of parental rights. Denying parents’ requests for the specific video links is an attempt to avoid accountability.

"The East Penn School District has violated parents' rights and must release the links to the four videos and all public records regarding 'Unity Week' and 'Day of Silence' immediately," said Mat Staver, Founder and Chairman of Liberty Counsel. "Parents have the right to know the exact nature of the special-interest propaganda their children have been subjected to when at school," said Staver.

Liberty Counsel is an international nonprofit, litigation, education, and policy organization dedicated to advancing religious freedom, the sanctity of life, and the family since 1989, by providing pro bono assistance and representation on these and related topics.