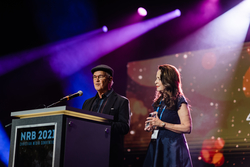 NASHVILLE, July 12, 2021 /Standard Newswire/ -- WHEN WE LAST SPOKE celebrates big wins at the 2021 ICVM Crown Awards held June 23 in Grapevine, Texas. The film received awards in each of the five categories it was eligible for, including the titles Best Picture and Best Narrative.

"We are so grateful to the wonderful team that helped make this film a reality," says Marci Henna. "So many years of love and hard work have gone into this movie. I want to thank the NRB and ICVMs for recognizing us and placing us with such an amazing group of nominees."

Past wins include "Audience Favorite" at the Austin Film Festival and the film's official selection at the Heartland International Film Festival.

Following the lovable and nutty family of sisters Juliet and Evangeline, WHEN WE LAST SPOKE gives viewers an insight into the beauty of the Cranbournes as they journey through the ups and downs of their unexpected situation.

Life for Juliet and Evangeline changes quickly after their father James departs to fight in the Vietnam War and their mother, who feels ill-equipped to raise two daughters alone, leaves them with their grandparents, Walt and Ruby, to pursue her own singing career. Together, the family learns how to overcome heartbreak and uncertainty by holding tight to the most important aspects of life – family, friends, love and forgiveness.

Inspired by the novel from Marci Henna, director Joanne Hock and screenplay writers Rick Eldridge and Jimmy Hager pack WHEN WE LAST SPOKE with humor, heartbreak and triumph. Audiences will leave grateful for the gift of family, the relief of laughter and with a newfound appreciation for the often kooky relationships with friends and family.

About ReelWorks Studios:
ReelWorks Studios, LLC was founded by Rick Eldridge in August of 2009 as a production services and distribution management company. Business offices are located in Charlotte, North Carolina with representation and offices in Santa Monica, California. CEO, Rick Eldridge, has been in the entertainment business for over 35 years as a producer, director, musician and creative visionary. The company now has over 100 titles under management comprised of feature film, television programming and digital media. Get all the latest news from ReelWorks at https://reelworks.net/.

About Marci Henna:
Marci Henna grew up near Austin, Texas where she graduated from the University of Texas with a B.A. in English. As a child, she lived with the Wakamba in Kenya, East Africa, in Santa Fe, New Mexico and in various Texas cities. For twenty years, she served on the executive committee of the Dell Children's Medical Center Foundation, on the James Dick Foundation (for the International Festival-Institute at Round Top, Texas) and on the boards of other nonprofits. She and her husband, Louis, have four beautiful children, two roly-poly dogs and reside in Austin, Texas and Santa Fe, New Mexico. For more information, visit www.firesidetexas.com.