Ideology Divides Us, Not Race 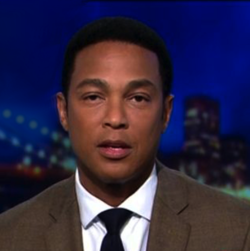 CNN's Don Lemon recently said, "We're living in two different realities as black and white people." But it is not race that divides us as much as it is ideology.

If blacks and whites really lived in different realities it would make it difficult for them to get along. However, Lemon, who is black, is positive proof that this is not the case. In his Washington Post interview, it was noted that he has "a bit of a lovefest" going on with CNN's Chris Cuomo. Indeed, Cuomo, who is white, likes to say during the handoff, "I love you." This suggests that Cuomo and Lemon share the same reality.

If Lemon really believed that the races live in two different realities, why did he choose to live in a town where 90% of the people are white, and rich ones at that? His home in Sag Harbor, New York is only 4.62% black, and it has not one Native American or Pacific Islander living there. Also, why, if whites and blacks live in two different realities is his "spouse" a white man? Seems they get along just fine.

Rep. Byron Donalds is a black Republican congressman. He recently sought to join the Congressional Black Caucus, but he was denied. He was not denied because he is black but because he is a Republican.

Whatever happened to being inclusive? Why did black congressional Democrats exclude Donalds? They proved that it is ideology, not race, that divides us.

Why is it that liberal black politicians and activists tend to support proposals to defund the police, while the average black person is opposed to this policy? It is not race that is dividing these two clusters of African Americans, it's ideology.

The U.S. bishops recently completed one of their two biannual meetings. All share the same religion, all are (approximately) of the same rank, all are men, and most are white. Their demographic profile suggests they live in the same reality. Yet they cannot agree on what to do about offering Communion to pro-abortion Catholic politicians. Once again it is ideology that matters.

There is also plenty of division in many American families. This is most evident during the holidays every year. Yet family members, being of the same race, share the same reality, at least according to Lemon. However, what divides them are their ideological predilections, not their race.

The Left has race on the brain. They see every issue through the prism of race, looking desperately for evidence that divides us. Indeed, racial division is what they live for, which explains their embrace of critical race theory. They don't fight racism—they promote it.

Don Lemon is not an anomaly. He is a prototypical liberal, one whose ideology, not his race, determines his perception of reality.