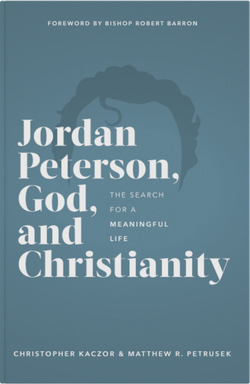 "Jordan Peterson, God, and Christianity: The Search for a Meaningful Life," endorsed by Peterson himself, is the first systematic analysis, from a Christian perspective, of both Peterson's biblical series on YouTube and his bestselling book "12 Rules for Life."

IRVING, Texas, July 29, 2021 /Standard Newswire/ -- The person most responsible for reintroducing God and the Bible into mainstream secular culture today is not a pastor, a Scripture scholar, or a bishop, but a psychology professor with no church membership. Jordan Peterson's lectures and writings on psychology, philosophy, and religion have been a cultural phenomenon, attracting tens of thousands to arenas and millions to his social media sites, and prompting many to leave behind secularism and reconsider Christianity.

Yet Peterson's own thought is marked by a tensive suspension between archetype and reality—between the ideal of Christ and the God who acts in history. When asked if he himself is a believer, Peterson responds, "I try to live as if God exists." More recently, in the wake of great personal suffering, Peterson's wrestling with the figure of Christ and, in his own wording, the profoundly "sane" quality of Catholicism, has reached a kind of crescendo in both his life and work.

"Jordan Peterson, God, and Christianity: The Search for a Meaningful Life," a new book from the Word on Fire Institute, is the first systematic analysis, from a Christian perspective, of both Peterson's biblical series on YouTube and his bestselling book "12 Rules for Life," with an epilogue examining its sequel, "Beyond Order." Christopher Kaczor and Matthew R. Petrusek draw readers into the depths of Peterson's thought on Scripture, suffering, and meaning, exploring both the points of contact with Christianity and the ways in which faith fulfills Peterson's project. Taking the "mere Christianity" of C.S. Lewis as its point of departure, "Jordan Peterson, God, and Christianity" is an indispensable analysis, not only for Christians hoping to better understand the significance of the Peterson phenomenon, but also for Peterson fans who are, perhaps for the first time in their lives, thinking seriously about what it might mean to believe.

"I find many aspects of Jordan Peterson's thought fascinating: the serious reading of Scripture, the integration of science and religion, the various sources of human insight including psychology and history brought into fruitful conversation," Kaczor explains. "It seemed to me that diving deeper into these issues in this book would be helpful not only for Peterson's many fans but for anyone who is concerned about issues of ultimate importance." Petrusek adds, "I started co-writing this book out of curiosity about Jordan Peterson the phenomenon; I ended writing it with great admiration for Jordan Peterson the man, even if I don't agree with all his ideas. Along the way, I've become convinced that everyone who cares about Truth—Christian and non-Christian alike—has good reason to listen to what he has to say about God, morality, and human nature, and, equally important, to learn from the way he is willing to say it: standing up straight with your shoulders back."

Word on Fire Catholic Ministries (wordonfire.org) exists to draw people into the Body of Christ, which is the Church, and thereby give them access to all the gifts that Jesus wants his people to enjoy. To be most effective in this mission, Word on Fire places an emphasis and urgency on the use of contemporary forms of media and innovative communication technologies. The Word on Fire Institute imprint, the publishing arm of the Institute, features high-level books written by Fellows of the Institute and other authors on a range of specialized topics related to theology, spirituality, evangelization, and more.