De Blasio and Cuomo Get Creamed in Court 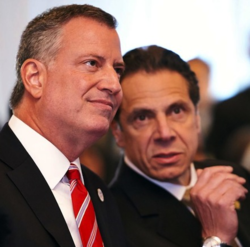 Protesters can take to the streets, some violently, and that is okay by Mayor Bill de Blasio and Gov. Andrew Cuomo—the mob does not have to abide by social distancing rules—but religious New Yorkers cannot congregate in their houses of worship lest they imperil the public health.

Well, the jig is up.

U.S. District Court Judge Gary Sharpe issued a preliminary injunction on June 26 saying that de Blasio and Cuomo (as well as Attorney General Letitia James) exceeded their authority by putting restrictions on people of faith while simultaneously condoning the protests.

By allowing the protests, they were "encouraging what they knew was a flagrant disregard of the outdoor limits and social distancing rules." In doing so, de Blasio and Cuomo "sent a clear message that mass protests are deserving of preferential treatment."

The Catholic League encourages people of faith to ignore all future restrictions placed on them by de Blasio and Cuomo. They exposed themselves as frauds when they gave the green light to thousands of protesters who took to the streets, night after night, while imposing draconian restrictions on the faithful. And they did nothing about those who totally ignored their responsibility to peaceably assemble.

De Blasio and Cuomo have lost the respect of practicing Catholics, Protestants, Jews, Mormons, Muslims, and those of every other religion. They got creamed in court, which is exactly what they deserve.