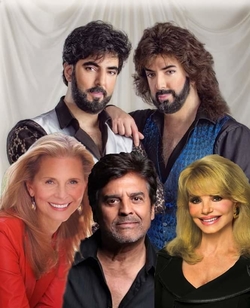 YORKVILLE, Ohio, June 11, 2021 /Standard Newswire/ -- The always busy and always unpredictable dynamic duo of Christian Music - The Chrisagis Brothers are at it again. They have become famous for their amazing life changing testimony of a miracle at the age of 7. Since then the twins (Brian & Shawn Chrisagis) have done 11 musical CD's, had their own toy line, Radio Shows, TV Specials, appeared on every major Christian Network and have had Hollywood wanting to do several reality shows on their amazing life plus a sitcom. They have been cast in a new feature film called "The Waiting Room" and at 53 years old they are still being chased by Hollywood for a TV show.

The brothers have been in full time ministry for over 36 yrs. They have broken many women's hearts by never getting married but both brothers have been engaged and come close to the altar of marriage a few times. They had several prophets speak over them and confirming a similar word over both of them that their lives are not their own but God's and that they would set Hollywood on fire for Jesus. Well they have done that.

They have worked with Erik Estrada, Jennifer O'Neill, Jack Scalia, Jo Ann Pflug and others as their PR, webmasters, personal assistants and spiritual coverings. They have also worked with celebrities like Jaclyn Smith, Cheryl Ladd, Kevin Sorbo, Joe Penny, Loni Anderson, Lindsay Wagner, Richard Dean Anderson and the list never ends. They had a youtube account with their music videos, TV appearances, radio interviews with Hollywood elites who all professed their faith.

Three years ago the Chrisagis Brothers (Shawn & Brian) lost their youtube account with 500 videos when it was hacked by someone against the message of Jesus for Hollywood. That hasn't stopped the brothers, in fact on July 31, 2021 at Rayland Buckeye Local High School in Rayland, Ohio doors open at 5:00 p.m. and the Chrisagis Brothers will celebrate in a BIG way with a new CD entitled "Let Heaven Overflow" and their guests for the evening are some of Hollywood royalties and legends such as Erik Estrada, Lindsay Wagner, and Loni Anderson. It is a Comic Con with a message of HOPE and the brothers hope to do one yearly is a major possibility. In a world of hate, uncertainties, rumors and political madness the brothers message is clear "LOVE" is the answer for the world and that type of LOVE is Jesus. For tickets call 740-859-2344.

If you need hope and are tired of living life with the same baggage you have carried for years, you need to come meet these life changers who have overcome it all, and guess what, they all believe their stories are not finished yet, there are more lives to change and more good to be done.

This year the brothers have once again been nominated for Best Duo of the Year from the Josie Awards and best Trailblazers of Fashion.

So buy your tickets now for Celebration with the Stars and enjoy the Chrisagis Brothers CD release party all in one night. Doors open at 5:00 p.m. and the stars will be signing and taking pictures at 5:30 p.m.