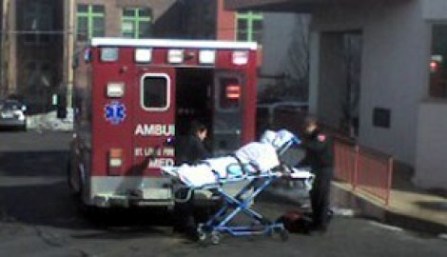 One of 74 women known to have required emergency medical
transport from RHS Planned Parenthood, the most dangerous
abortion facility in the U.S.

News provided by
Operation Rescue
June 10, 2019
ST. LOUIS, Mo., June 10, 2019 /Standard Newswire/ -- St. Louis Judge Michael Stelzer has granted a preliminary injunction to Reproductive Health Services Planned Parenthood, the last abortion facility in Missouri. The injunction prevents Planned Parenthood's facility license from expiring and allows them to continue conducting surgical abortions until further order of the court - over the objections of the Missouri Department of Health and Senior Services (DHSS).
"We are disappointed that this judge decided to prevent the DHSS from enforcing the laws and regulations of Missouri that were enacted to protect women from harm," said Troy Newman. President of Operation Rescue. "With the help of local activists, we have documented at least 74 women who have suffered harm at RHS Planned Parenthood and were transported to local hospitals by ambulance. We believe that makes this abortion facility is too dangerous to operate. It should be shut down in order to protect the public from further serious harm that other women have already suffered."
RHS Planned Parenthood failed a facility inspection in March 2019, which put them in non-compliance with licensing requirements. It also failed to submit an acceptable plan of correction prior to the expiration of its license on May 31, 2019.
The DHSS indicated it would not renew the facility license as long as RHS Planned Parenthood remained in non-compliance and while it failed to cooperate fully with an investigation into multiple incidents of botched abortion attempts that left women still pregnant without having been informed that their abortions had been bungled.
That is when RHS Planned Parenthood sought and received a temporary restraining order to prevent the expiration of its facility license.
Since then, RHS Planned Parenthood has submitted an acceptable plan of correction for deficiencies cited in the March inspection, according to Judge Stelzer's ruling. However, the abortion business has not provided access to several physicians who conducted abortions that resulted in adverse outcomes at the Planned Parenthood facility.
Although Judge Stelzer took no position on whether RHS Planned Parenthood's license should be renewed, he ordered the DHSS to make a decision on RHS Planned Parenthood's license renewal application no later than June 21, 2019. He set a status conference for June 21, 2019, at 9:00 a.m.
Read the preliminary injunction order.
Read this press release online.
About Operation Rescue®
Operation Rescue is one of the leading pro-life Christian activist organizations in the nation and has become a strong voice for the pro-life movement in America. Click here to support Operation Rescue.
SOURCE Operation Rescue
CONTACT: Cheryl Sullenger, Senior Vice President, 316-516-3034
info.operationrescue@gmail.com;  Troy Newman, President, 316-683-6790 ext. 111
Related Links
OperationRescue.org
AbortionDocs.org
Abortion911.com