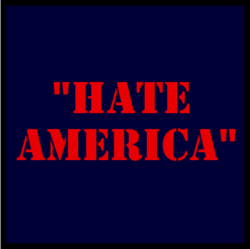 The United States is beset with numerous problems, though none as serious as teaching students and workers why they should hate America. It is an intellectually dishonest game, riddled with distortions and out-and-out lies about American history, as well as tortured interpretations of current events.

It is disturbing to note that the left-wing agenda is no longer confined to places like higher education and the media. No, it has been mainstreamed into the corporate world, collegiate and professional sports, and beyond. Some politicians have also embraced the "Hate America" campaign.

There are three identifiable stages to this campaign.

The baby boomers, who were born after World War II, came of age in the Sixties at a time of unprecedented affluence and domestic strife. The civil rights movement, the war in Vietnam, and the sexual revolution wrought chaos and confusion. The Sixties and Seventies were marked by a movement to hate America, though the agenda of the left was inchoate as compared to the stages that followed.

Stage one flowered in academia and in select urban neighborhoods. College students were taught how racist and sexist our heritage is, and how imperialistic our foreign policy is. Amerikkka, as it was called, was the land of oppression. It did not matter that those who promoted this lie were Marxists, the masters of oppression. Parts of many urban areas, particularly on the east and west coasts, were overtaken by drug-addicted hippies who preached love while throwing Molotov cocktails at the police.

Stage two was born in the Eighties. Just as the college campuses gave rise to the first installment of hatred, they were the site of the second wave. Its principal vehicle was multiculturalism. This pedagogical tool was never about teaching students to appreciate diverse cultures; rather, it was used as an ideological weapon to trash Western civilization and its Judeo-Christian heritage.

Pope Benedict XVI wasn't fooled. Multiculturalism, he observed, has led to "a peculiar Western self-hatred that is nothing short of pathological." The distinguished historian, Arthur M. Schlesinger Jr., was more specific. "There is surely no reason for Western civilization to have guilt trips laid on it by champions of cultures based on despotism, superstition, tribalism, and fanaticism."

Multiculturalism is also about fomenting division, segregating various demographic groups, emphasizing how little we have in common.

We see expressions of it today. The class of 2021 at Columbia University allows for separate "Multicultural Graduation Celebrations." The menu includes events for Native, Asian, "Latinx" (it is not chic to have masculine and feminine identifiers, as in Latinos and Latinas, respectively), African Americans, Lavender (homosexuals and transgender persons) and FLI (first-generation, low-income students). This obviously presents a dilemma for rich gay first-generation persons of mixed ancestry, but such is life at the Ivies these days.

The third stage of the "Hate America" campaign, which began in the 1990s and is now in full bloom, is grounded in critical race theory, an ideology that was crafted by racists to combat racism. It is a curious blend of Marxism (the capitalists are the oppressive class) and racism (white people are inherently racist). Its popularity is widespread, extending from the halls of government to Wall Street. The Biden administration is currently weighing strategies to implement critical race theory in the schools, making certain that no one will escape participation in the "Hate America" campaign.

Where do you rank on the scale of "power and privilege?" That is what first-grade students in California are being asked. In Missouri, middle-school teachers are being asked to rate themselves on an "oppression" index. Predictably, the bad guys are white, heterosexual, English-speaking, Christian males. They oppress people. Take note of that, Oprah.

The campuses are alive with critical race theory. Michigan State University will hold a conference in May instructing white students to admit their "white privilege," even if reared in a foster home. At Smith College, all employees were forced to undergo "antibias" training after a black student claimed she was racially profiled. It was later learned that she lied. Georgetown fired a tenured professor for simply noting that her black law students were not doing well in her classes.

There is little pushback in the corporations, or on the college campuses, against the "Hate America" campaign, but there are signs that parents of elementary school students have had enough.

In New York City, Megyn Kelly pulled her two children from a pricey Upper West side school. She was followed by a father who took his daughter out of an expensive Upper East side school; he made his informed letter public, sharing it with the school's parents. A faculty member at Grace Church School in Greenwich Village recently went public with his complaints against the headmaster: He accused him of "demonizing white people for being born."

Not until more Americans object to these pernicious "Hate America" campaigns in the workplace, schools, and government will we liberate ourselves from this demonic attack on our heritage and our sensibilities. The barbarians are not at the gate—they've captured our culture and our institutions.