A new report, cross-referencing that research across major U.S. denominations, reveals not only a stunning erosion of biblical belief among pastors in all denominational groupings, but that the churches whose pastors were by far the most likely to embrace basic biblical principles were those serving non-denominational and independent Protestant churches.

Of the seven denominational groupings (full list below) evaluated in the nationwide survey of pastors, just one features at least three out of every four pastors holding biblical views on a majority of the 17 basic beliefs evaluated.

Among the other six denominational families studied—which cumulatively represent more than 90% of all Christian churches in America—none had at least three-quarters of their pastors holding biblical views on even half of the beliefs tested.

Among the most surprising outcomes was how few pastors of evangelical churches, in particular, hold biblical beliefs.

Thirty-nine percent (39%) of evangelical pastors surveyed contend that there is no absolute moral truth and that each individual must determine their own truth. Only 38% maintain that human life is sacred and 37% say that having faith matters more than which faith you have.

Amazingly, given the foundations of evangelicalism, three out of every 10 (30%) do not believe that their salvation is based on having confessed their sins and accepting Jesus Christ as their savior.

At least seventy-five percent (75%) of evangelical pastors held biblical views related to only four of the 17 beliefs studied.

That number, however, was twice as many as pastors from mainline, Pentecostal and Catholic churches.

Lowest on the list were pastors from Holiness churches and traditionally black denominations, as there were zero instances where at least three out of four pastors from those groups possess biblical views on the basic scriptural principles evaluated.

Other surprising results include seventy percent (70%) of pastors associated with traditionally black congregations believing that reincarnation is a possibility, while only 34% of Catholics agree that human life is sacred—with sixty-one percent (61%) of Catholics saying the Bible is ambiguous on abortion.

Breaking down pastors' beliefs by their positions within the church led to equally surprising results, as the least biblically centered, by a substantial margin, are executive pastors—less than half of whom hold biblical views on 15 of the 17 perspectives evaluated.

Suggesting the increase of cultural and political influence into the church, it was also found that, among senior pastors, one-third or more also believe that socialism is preferable to capitalism and that allowing property ownership facilitates economic injustice.

Overall, the survey examined more than three dozen beliefs held by pastors. The full results and methodology can be found at www.arizonachristian.edu/research.

Dr. Barna is available for interviews.  To arrange, contact jason@jonesliterary.com 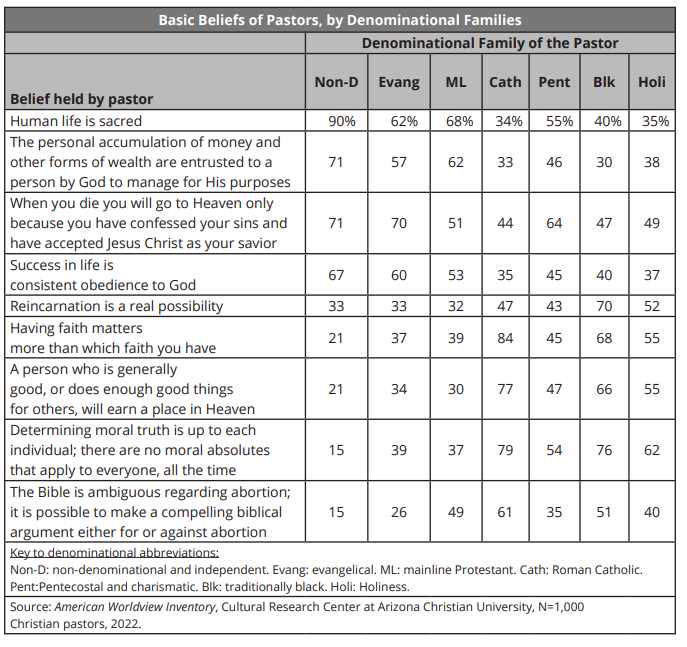