People Who Left LGBTQ Because They Wanted to come to DC with a Message: Don't let Activists Restrict Freedom of Conscience, Speech and Religion 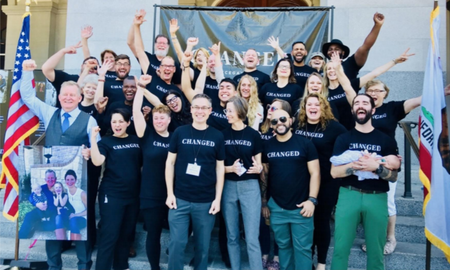 WASHINGTON, June 1, 2021 /Standard Newswire/ -- Whether it's a ban on counseling choice, the elimination of a free market for faith-based organizations, or granting privileges to transgender women above biological women, Sexual Orientation Gender Identity (SOGI) legislation politicizes sexuality and reduces freedoms. Codifying LGBTQ identity as immutable through legislation denies that sexuality is fluid and will never resolve the confusion and fear that many LGBTQ identified people feel.

"I didn't want to live life as a gay man. I was tormented by suicidal thoughts and was unfulfilled. The talk therapy I received when I was a minor saved my life. I wanted a different way forward and my sexual desires eventually changed. I have been married to my wife for 15 years. We have four children together. Today I am connected to thousands who left LGBTQ behind. SOGI legislation takes away our rights to freedom of religion, speech and equal treatment by promoting LGBTQ identity as the only way forward."

"CHANGED has come to DC to appeal to Congress to focus on human dignity, not identity politics. We are Christians with LGBTQ in our past. Many, like us, have changed. We left LGBTQ because we wanted to. Article 18 of the Universal Declaration of Human Rights affirms we have the right to live out what we believe. Fair treatment in America shouldn't rest with one's social identity, like LGBTQ or even religious beliefs, but with respect for the dignity of every person."

We appeal to America's legislators to recognize that the LGBTQ identity is subjective and that most demands for LGBTQ "equality" restrict:

3) Real Education and Access for Healthy Youth Act (REAHYA) will indoctrinate children with LGBTQ values on gender identity and sexual expression. CSE is already doing this in many states.

4) Sen. Marco Rubio recently called Amazon out, but Ryan Anderson is not the only one to have his/her opinion censored.