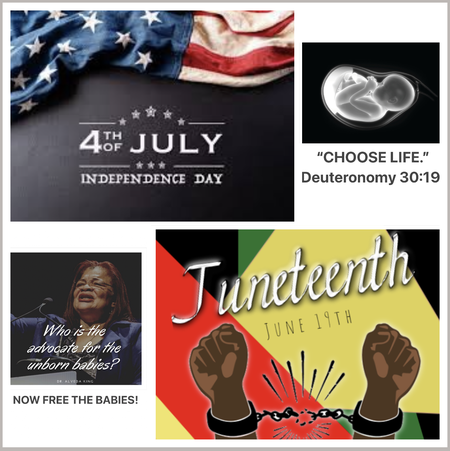 ATLANTA, July 2, 2021 /Standard Newswire/ -- The following is submitted by evangelist Alveda King, she is available for comment:

On July 4th, as we celebrate Independence Day this year, I can't help believing that if we can finally see ourselves as the one blood hu(e)man race, many of our problems including abortion, racism, which lives matter, critical race theory, systemic racism, and all human injustices will be resolved.

"We hold these truths to be self-evident, that all men are created equal, that they are endowed by their Creator with certain unalienable rights, that among these are life, liberty and the pursuit of happiness." – Declaration of Independence, July 4, 1776

Here in the 21st century, we the governed need to speak up to the government we entrusted with its power. We need to let them know that babies in the womb are among those "men" who were created equal, and that to kill them in the womb is to deny them their inalienable right to life.

Obviously not all men and women were equal in America when Thomas Jefferson penned those words that were adopted by the 2nd Continental Congress on July 4, 1776. Blacks were still being held as slaves; Jefferson himself owned slaves. Native Americans would spend the next 100 years being dispossessed of their land. Women couldn't vote and had virtually no rights independent of their fathers and husbands.

Even years later, when Lincoln signed the Emancipation Proclamation on January 1, 1863, the job was not complete. More progress was accomplished months later on Juneteenth, June 19, 1865.

Anyone who doubts that we've come a long way is just plain wrong. In America, one class of individuals is no better off than they were in 1776 and 1865. The unborn. They are the one group deprived of their birthright, and their birthday. Among those tiny, innocent victims, black babies are the worst off.

Some know that abortion disproportionately impacts the Black community. According to the federal Centers for Disease Control's Abortion Surveillance Report for 2018 – the most recent available – 335 Black babies were killed by abortion for every 1,000 who were born. By comparison, the numbers for white women, "other" women and Latinas were 110, 213 and 158, respectively.

It's also no secret that businesses selling abortion love to set up in minority communities. This year Planned Parenthood disingenuously separated itself from its founder, Margaret Sanger, a eugenicist who seemed intent on making sure Black babies never made it out of the womb, but the fact remains that the nation's biggest abortion seller gives lip service to the Black Lives Matter movement while snuffing out hundreds of Black lives every day.

What's to be done?

For starters, we can push for and support legislation in the states that protect babies from abortion based on race. Currently six states ban abortions sought because of the race of the baby but the laws are in effect in only three – Arizona, Mississippi and Tennessee. The rest have fallen to court challenges.

At Priests for Life we've initiated a new campaign: My Heart Beats Just Like Yours, giving voices to babies in the womb whose beating hearts tell us that life has clearly begun.

When we entrust our government to represent our wishes, we don't want late-term abortion or any legal abortion. God says: "Choose life."  Yet, there's a bill in Congress right now, the Women's Health Protection Act, S. 1975/H.R. 3755, that would negate virtually every restriction on abortion at every level of government. Abortion on demand would be available at any stage in a pregnancy, including beyond viability. We cannot stand for this.

There is one critical race; the hu(e)man race; this includes the babies in the womb. It is wrong to discriminate against the critical human race for any reason; including skin color and gestational age. Further, we are not colorblind.

We must learn to see and love each other as the human race; the human family; from womb to tomb.

If we truly believe the right to life is unalienable and that the government serves with power we the people have given them, it's well past time that we right these unconscionable wrongs and let freedom ring for everyone.