Christian Pastor Returned Home After Suffering Imprisonment, Torture and Abuse at the Hands of the Chinese Government 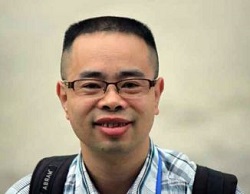 According to his wife, Wang Hongwu, Yang broke out into loud worship songs after his release. She said, "Even though my husband experienced misfortune, his belief remains resolute."

Yang was first imprisoned on Dec. 9, 2015, after trying to prevent authorities raiding Huoshi Church from confiscating a hard drive. The next day, officials handed him two consecutive, five-day administrative detention sentences for "the crime of obstructing justice" and "gathering a crowd to disturb public order." When Wang came to pick him up after his sentence ended, however, she saw him wearing a black hood and boarding an unlicensed vehicle. Upon inquiry, she learned that the government changed his charge to "illegally possessing state secrets," and that he was being transferred into criminal detention. On Jan. 22, 2016, his charge changed again, this time to "divulging state secrets."

During the time leading up to his trial, he was repeatedly tortured by his prosecutors in order to obtain a confession, according to an interview documented by his lawyers. The attorneys subsequently asked for the prosecutors' removal from the case, but the court permitted them to remain on. Authorities found Yang guilty and sentenced him to two-and-a-half years in prison on Jan. 5, 2017.

However, it is likely the authorities rigged the trial, since, according to a confidential document leaked by two Huoshi Church attendees, the court in question is under the command of a government body specifically designed to target Huoshi Church.

While in prison, Yang contracted vasculitis and had to be hospitalized after inadequate prison medical care rendered him unable to walk. He was temporarily transferred to another detention center and allowed to recuperate. He also contracted diabetes.

ChinaAid exposes abuses, such as those suffered by Yang, in order to stand in solidarity with the persecuted and promote religious freedom, human rights, and rule of law.