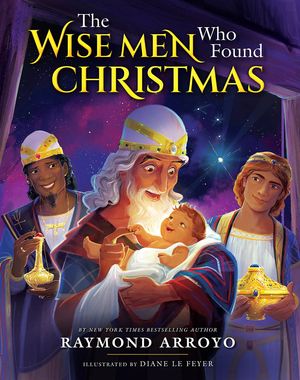 Layton renewed the seasonal classic 'We Three Kings' with fresh lyrics inspired by "The Wise Men Who Found Christmas" and created an original video featuring animated illustrations from the book.

The song, a blend of traditional and modern, just released on YouTube as a lyric video. The newly inspired "We Three Kings (We Magi of Orient Are)" was produced by GRAMMY® and Dove Award-winner Keith Everette Smith.

The dynamic duo is hitting the streets this fall with various national tours. Raymond Arroyo is in the middle of his national book tour and Tasha Layton will be joining the K-Love Christmas Tour slated to stop in 11 cities across the country beginning December 1st.

About Tasha Layton
Since first captivating radio audiences in 2020, Tasha Layton has become one of Christian music's most celebrated female vocalists. Her recently released full-length debut, How Far, features the #1 single and title cut, along with the #1 smash "Look What You've Done," and her breakthrough hit, "Into The Sea (It's Gonna Be OK)." Named one of Billboard's Top 5 female Christian artists in both 2020 and 2021, the South Carolina native has been featured on ABC's GMA3: What You Need To Know; co-hosted the 52nd GMA Dove Awards Pre-Telecast; and was recently showcased in the premier episode of K-LOVE On Demand's Empty Stage with Andrew Greer. Also an author, Layton's guided prayer journal, "Boundless: Moving Freedom From Your Head To Your Heart," released last fall. Prior to her solo career, she appeared on Season 9 of American Idol and spent four years as a back-up vocalist for pop superstar Katy Perry. Layton's 10-song holiday debut, This Is Christmas, releases November 11.

About Raymond Arroyo
Raymond Arroyo is a New York Times bestselling author, an international broadcaster and Fox News contributor who has worked for CNN and the Associated Press. He is also host and managing editor of "The World Over Live" on EWTN. Arroyo has made frequent appearances on The Today Show, Good Morning America, The Ingraham Angle, CNN Headline News, Access Hollywood and many more. His work has appeared in The Wall Street Journal, The Financial Times, Newsweek, Time Magazine, The New Yorker, and elsewhere. A native New Orleanian, Arroyo is passionate about sharing the unique culture of his beloved Crescent City. Earning a Telly Award, Arroyo produced, wrote and hosted a musical Christmas special for PBS called Christmastime in New Orleans along with an eponymous Billboard chart-topping soundtrack (Verve Records/AimHigher). His eight books, including his best-selling multi-book Will Wilder Middle Grade series (Random House Kids) were all New York Times Bestsellers.