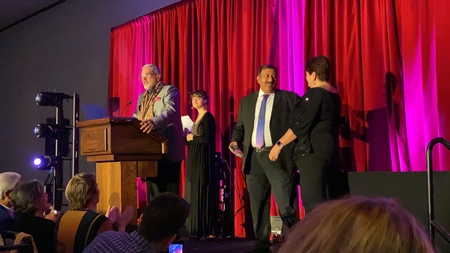 NASHVILLE, Nov. 20, 2019 /Standard Newswire/ -- The movie, THE LEAST OF THESE: The Graham Staines story won Best Picture at the ICVM Crown Awards Saturday, November 16, 2019. It also won for Best Evangelistic, Best Drama Over $250,000, Best Actor (Stephen Baldwin) and Best Supporting Actress (Aditi Chaengappa). Directed by Aneesh Daniel, it tells the story of a missionary who works with lepers in India and a journalist seeking truth.

Grace and Gravity, a film directed by Andrew Walkington, won Best Drama Under $250,000, as well as the Bronze Crown Award for Best Picture.

Caitlin Carmichael won Best Actress for her portrayal in Epiphany and Richard Brimblecombe won the Best Supporting Actor in his role in Grace and Gravity.

For more information, go to the website at www.icvm.com. ICVM will host the annual conference November 11-14, 2020 in Glendale, California.