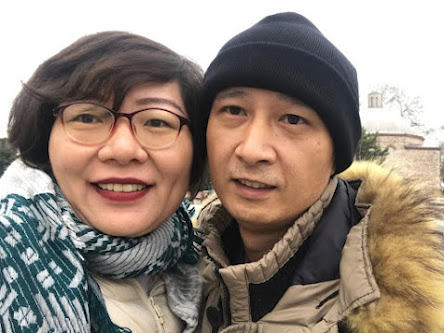 "Several months ago, prisoners released from Chishan prison, Hunan Province, China, where my husband is being held confirmed that my husband has become a slave laborer, whose work is exploited by Milwaukee Tools Company. Prisoners in Hunan Chishan prison produced 4800 - 14,400 units of Milwaukee gloves daily. These gloves are sold throughout the US at major marketplace such as Home Depot."

Gifts to ChinaAid helped rescue Shi and her daughter and bring them to the United States in April 2021 so both could live in safety. Her husband Cheng Yuan remains jailed for advocating for education, employment, and healthcare rights for disadvantaged groups in China.

Shi remains passionate about speaking out for human rights in China and raising awareness about her husband's plight, thanks to all those who support freedom in China.

In a Change.org petition that calls on Milwaukee Tool to "stop using Chinese prisoners of conscience as slave labor," Shi writes that inhumane forced-labor conditions have plagued Cheng with "severe back, shoulder and lower back pain."

Cheng and other prisoners exploited as slave labor can't endure these brutal and inhumane conditions.

ChinaAid calls on all people of good will to please stand for freedom alongside Shi by signing her Change.org petition addressed to Milwaukee Tool leadership, major American retailers, and government officials.

Make your voice heard to ensure Chinese prisoners of conscience are not used as slave labor.